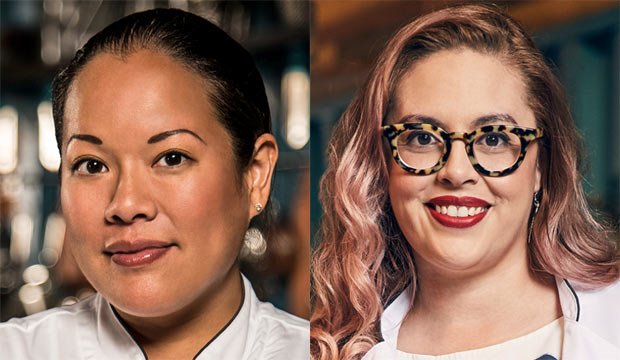 Last week on “Top Chef,” Season 1 contestant Lee Anne Wong and recent eliminee Claudette Zepeda-Wilkins proved victorious in “Last Chance Kitchen” and were allowed to enter the main competition. While Zepeda-Wilkins was only out of the competition for three weeks, Wong hasn’t competed for a whopping 14 seasons. Do either of these chefs have what it takes to be named the “Top Chef” Season 15 winner, or will one of the other nine contestants prevail?

Honolulu, Hawaii resident Wong came in fourth place back in Season 1, losing to eventual champ Harold Dieterle. And Zepeda-Wilkins, who hails from San Diego, California, was told to pack up her knives in the second episode of Season 15. During last week’s episode judge Tom Colicchio couldn’t decide which person to bring back into the competition, so he declared it to be a tie. He also mentioned that “Last Chance Kitchen” wasn’t closed for the season, so expect another eliminated chef to return at a later date.

According to Gold Derby’s exclusive odds, the winner of “Top Chef” will be either Christopher Scott (5/6 odds), Fatima Ali (2/1 odds), Bruce Kalman (16/1 odds) or Tanya Holland (25/1 odds). After five episodes, nobody has won more than a single elimination challenge, so there’s no competition frontrunner. However, Bruce, Christopher, Carrie Baird and Joe Sasto all have one victory under their belts.

As for our elimination predictions, Joseph Flamm has leading 7/4 odds to go home in Season 15, Episode 6. Carrie is next on the chopping block at 7/2 odds, followed by Tanya at 15/2 odds. Who do YOU think will be sent to “Last Chance Kitchen” in Thursday’s all-new episode? Tune in to Bravo to find out.