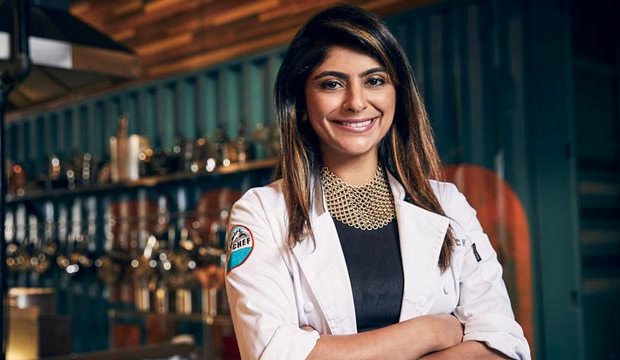 Which aspiring chef was sent home this week in Season 15 of Bravo’s “Top Chef”? In Thursday’s episode, head judge Tom Colicchio sent the remaining chefs on a camping trip where they were tasked with making a five-star meal outdoors. Prior to the episode airing, Fatima Ali remained our frontrunner to win the season while Bruce Kalman had the best odds of going home next. Did he beat the odds and remain in the competition to cook again?

Below, check out our minute-by-minute “Top Chef” recap of Season 15, Episode 5, titled “This Is Not Glamping” to find out what happened Thursday night. Then be sure to sound off in the comments section about your favorite chefs, which dishes from the episode looked the tastiest and who you think can go the distance to win the title of “Top Chef.” Keep refreshing/reloading this page as we’ll be updating live.

9:59 p.m. – Last week Tyler Anderson was eliminated despite having won the season’s first challenge and finishing in the top again the week prior. That a chef with such a good record already in the competition could go home in the fourth episode is proof that this is a competitive cast and that anyone could be sent home at any time!

10:03 p.m. – When the chefs walk into the kitchen for their Quickfire Challenge they find the Last Chance Kitchen contestants in the middle of a challenge that will end with one of them entering the main competition. The three chefs competing for that chance are Kwame Onwuachi from Season 13, Lee Anne Wong from Season 1 and Claudette Zepeda-Wilkins who has battled her way through Last Chance Kitchen since she was eliminated in the second episode.

10:06 p.m. – Claudette’s chicken liver, Kwame’s chicken hearts and Lee Anne’s beef liver dumplings all impressed Tom with high flavor and for being well thought out. His first decision was to eliminate Kwame, a chef who previously made it all the way to 6th place on his original season.

10:12 p.m. – Going with his gut instinct and a difficult decision ahead of him, Tom announces that it’s a tie and both Lee Anne and Claudette would re-enter the competition!

10:14 p.m. – With that, Padma Lakshmi fills the group in that there will be no Quickfire Challenge this week. Instead they’ll jump right into their Elimination Challenge–a camping trip! Their tasked with cooking as campers, with a fire and limited supplies as well as proteins and ingredients native to Colorado.

10:20 p.m. – Following a shopping trip for supplies, the chefs arrive at their camp to realize that they’re so high up in the mountains that the campground is covered in snow. I can’t imagine this is going to be a fun or easy night for them!

10:25 p.m. – After pitching their tents, the chefs had 20 hours until service began so they started to prep their dishes as darkness descended on the camp. Christopher Scott is working with buffalo meat for the first time in his life, Carrie Baird has planned a cake and Lee Anne using the night to render goose fat for her cracklins.

10:31 p.m. – In the morning, Carrie has built a make-shift oven by digging into the snow and building a fire within a hole there so that she can bake her cakes. Unfortunately, her first batches burned because the tin cans conducted the heat too quickly and they were getting too hot, too fast. Meanwhile, Christopher is concerned that he’s not bringing enough to his buffalo dish and could be headed toward the bottom.

10:40 p.m. – Up next was Adrienne Cheatham‘s quail, Lee Anne’s goose cracklins, Joe Sasto‘s trout and Claudette’s elk. Lee Anne earned high marks for her dish with all of the judges scraping their plates for every bite and while Adrienne, Joe and Claudette all served nice dishes, the judges didn’t seem over the moon about any of them.

10:49 p.m. – At Judges’ Table, also in the snow, Bruce, Lee Anne and Carrie were named as the favorite dishes of the day. All the other chefs expressed how impressed they were with Carrie’s homemade oven and the struggle she went through to bake cakes at camp. But even with that support, Bruce’s pasta was declared the winner!

10:51 p.m. – The least favorite dishes belonged to Christopher, Tanya and Tu. Christopher’s meat was overcooked and came out dry, Tu bit off more than he could chew and should have cooked his rabbit in one specific way, and Tanya’s plating of her sauces and portions were too uneven to make her dish complete.

10:58 p.m. – Tom told the chefs that all three dishes were overly complex, and that ultimately Tu’s failure to provide more than just meat on his plate is what sent him home. But he’s not going home just yet–Last Chance Kitchen isn’t over so he’ll return to the kitchen for a chance to re-enter the main competition at a later point in the season!

SEE‘Top Chef’ 15 episode 3 recap: Which 2 chefs turned in their knives in ‘Keep on Truckin’?

Who will be eliminated? Tu David Phu

Who will be in bottom 2, but safe? Tanya Holland and Christopher Scott

Who will win the main challenge? Bruce Kalman

Who will win the Quickfire challenge? No one