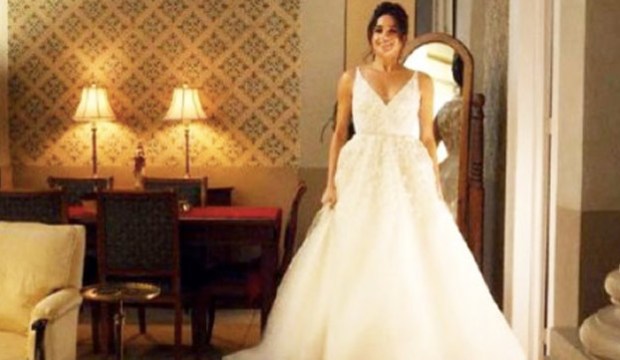 Former “Suits” star Meghan Markle will marry Prince Harry on May 19 in the most buzzed about wedding of the year. Rumors are swirling as to what her dress will look like when she walks down the aisle — though it reportedly cost a pretty penny. As a recent television star Markle could draw inspiration from some of the most memorable wedding dresses from the last quarter century on the small screen. Click through our gallery of some of the most beautiful and unique wedding looks worn on TV in the last 25 years.

A couple of dresses on our list already have royal connections. In 2016 the Netflix drama series “The Crown” created a replica of the dress worn by then-Princess Elizabeth (who would soon become Queen Elizabeth II) for her wedding with Philip, Duke of Edinburgh, in the premiere episode “Wolferton Splash.” Those costumes were designed by Michele Clapton, who would go on to win the Emmy for Best Period/Fantasy Costumes.

Before that Clapton had won three Emmys for “Game of Thrones.” That included the 2014 prize for costuming the episode “The Lion and the Rose,” which focused on another glamorous wedding, but one Meghan and Harry probably wouldn’t want to emulate. That was the “Purple Wedding,” which ended with the death by poisoning of King Joffrey (Jack Gleeson).

Prince Harry’s mother, the late Princess Diana of Wales, had one of the most famous weddings in television history when she married Prince Charles in 1981. Her dress for that ceremony was the inspiration for one worn by Jayma Mays as “Glee” guidance counselor Emma Pillsbury in preparation for her ill-fated wedding to football coach Ken Tanaka (Patrick Gallagher). If nothing else, that dress was a lesson in why commoners do not need a wedding dress with a 25-foot train.

Soon-to-be-Princess Meghan also got to be a bride once before when her “Suits” character Rachel Zane married her beau Mike Ross (Patrick J. Adams) before both of their characters were written off the show in 2018. That one was designed by Anne Barge, but we’re guessing the real-life bride wouldn’t want to wear the same dress twice.