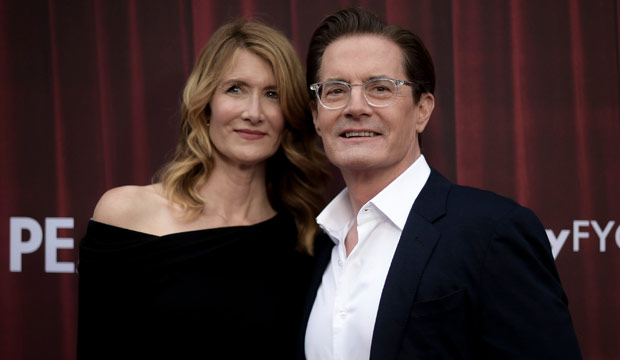 Showtime brought prospective Emmy voters back to the strange world of “Twin Peaks” recently with an Emmy FYC event for its revival, “The Return.” Gold Derby was on the red carpet at Paramount Studios in Hollywood to chat with stars Kyle MacLachlan and Laura Dern before a screening and Q&A, where they were joined by director David Lynch. Scroll down and click on the links at the bottom of this post to be taken to our complete interviews.

“Who killed Laura Palmer?” was the question on everyone’s lips when “Twin Peaks” originally premiered on ABC in the spring of 1990. With co-creator Mark Frost (“Hill Street Blues”), Lynch brought the surreal sensibilities of his films “Eraserhead” (1977) and “Blue Velvet” (1986) to the TV masses with the story of an FBI agent (MacLachlan) investigating the murder of a homecoming queen (Sheryl Lee) in a small Pacific Northwest town. The show was a success, snagging 14 Emmy nominations in its first season, including Best Drama Actor (MacLachlan), Best Drama Actress (Piper Laurie), Best Drama Supporting Actress (Sherilyn Fenn), Best Drama Directing (Lynch), Best Drama Writing (Lynch and Frost), and Best Drama Series, losing to “L.A. Law.” The pilot won trophies for its costumes and editing.

Audiences were so mesmerized by its bizarre images and eccentric cast of characters that the show was granted a second season. But viewership began to wane after the identity of Laura’s killer was revealed, and “Twin Peaks” ended with a finale that left fans with many more questions. Those questions were answered (sort of) with Showtime’s revival, which picked up 25 years after the original left off. All 18 episodes were directed by Lynch and written by Lynch and Frost. Several of the original cast members returned alongside many newcomers, including Dern, Naomi Watts, and Robert Forster.

Although Lynch was initially vague about details, MacLachlan admits he “would’ve said yes” to anything just for “the opportunity to go back and work with David.” When he finally read the script and found that not only would he be reprising the role of Agent Dale Cooper but would also be taking on about three or four new identities, “I was nervous, excited, and energized. The idea of being able to play characters so far removed from Cooper within the world of ‘Twin Peaks’ to me was really exciting.”

SEE Emmys 2018: David Lynch (‘Twin Peaks: The Return’) could have an 18-hour advantage in writing and directing races

Lynch was even vaguer with Dern, initially saying “that he couldn’t tell me anything, even what it was, but there was something he was cooking up and I was going to be part of it.” When she found out she would be taking on the part of Diane, Cooper’s previously unseen FBI secretary, “it was a blessing” because “she is everything you’d want to dream up in a character. She is two sides of one story, or many stories. We don’t know the answers to David’s worlds.”

The creative partnership between Lynch, MacLachlan and Dern has spanned decades. The three worked together on “Blue Velvet,” while MacLachlan also appeared in the director’s “Dune” (1984) and “Twin Peaks: Fire Walk with Me” (1992) and Dern acted in “Wild at Heart” (1990) and “Inland Empire” (2006).

Click on their names below to be taken to their full interview: