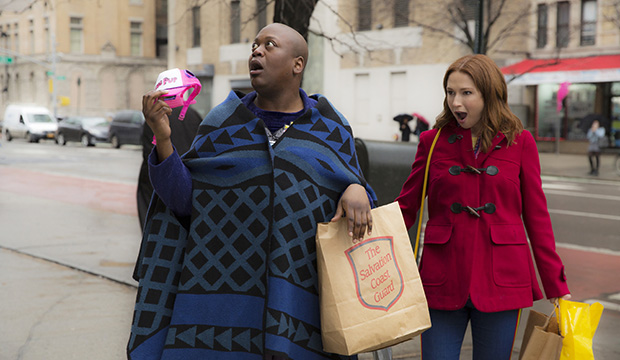 Does size matter? Apparently not where Emmy is concerned. Netflix’s “Unbreakable Kimmy Schmidt” just made history at the 2018 Emmys for tying the shortest season ever nominated for Best Comedy Series. At only six episodes, “Kimmy” Season 4 now matches the previous record set by “Kate & Allie” Season 1 in 1984 and “The Wonder Years” Season 1 in 1988. In recent years, eight episodes was the smallest number for shows like “Veep” Season 1 in 2012, “Silicon Valley” Season 1 in 2014 and “Louie” Season 5 in 2015.

Of course, this season of “Kimmy” wasn’t designed to only be six half-hours. Since showrunner Tina Fey was busy producing her Tony-nominated Broadway musical “Mean Girls,” production on this fourth and final season was delayed. Netflix decided to premiere the first six episodes at the tail-end of the Emmy eligibility cycle so that they wouldn’t miss out on any momentum from the often-nominated series. The remaining episodes will debut January 25 and thus be eligible at the 2019 Emmys.

Other than its bid for Best Comedy Series, “Unbreakable Kimmy Schmidt” only nabbed one other nomination this year, for Tituss Burgess in Best Comedy Supporting Actor. That means leading lady Ellie Kemper was snubbed for her work on this season, along with scene-stealing performers like Jane Krakowski, Carol Kane, Amy Sedaris, Busy Philipps, Aidy Bryant, Jon Hamm, Greg Kinnear and Bobby Moynihan.

SEE2018 Emmy nominations: ‘Game of Thrones’ leads with 22, followed by ‘SNL’ and ‘Westworld’ with 21 apiece

While “Kimmy” now ties Emmys history for being nominated for only six episodes, three other nominees this year came in at eight episodes: Amazon’s “The Marvelous Mrs. Maisel,” HBO’s “Barry” and HBO’s “Silicon Valley.” Next up is HBO’s “Curb Your Enthusiasm” and Netflix’s “GLOW” with 10 episodes apiece, followed by FX’s “Atlanta” with 11 episodes. Of course, being on a broadcast network, ABC’s “Black-ish” trounces them all with a whopping 23 episodes.

As Gold Derby’s senior editor Daniel Montgomery noted last year, “In this era of Peak TV … broadcast networks are at a disadvantage these days, especially if they produce 20 or more episodes a season. They need to work faster with less money per episode.” Let that be a lesson to future TV shows: When it comes to the Emmys, less is more.