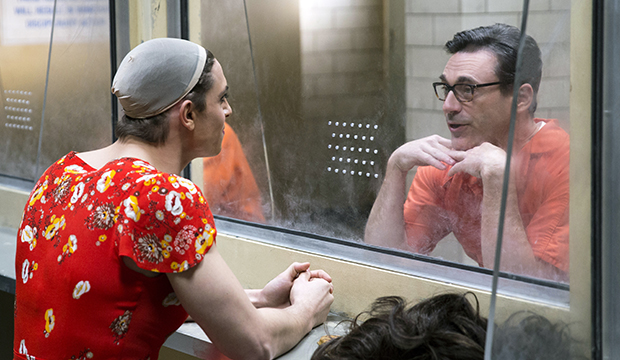 “American Vandal” is the Netflix true crime mockumentary that has all the Emmy buzz, but there is another one that voters must consider: “Party Monster: Scratching the Surface.” OK, it’s sadly not a real doc, but it is a real episode of “Unbreakable Kimmy Schmidt” that finds the comedy operating at the peak of its abilities.

The third episode of Season 4, “Party Monster: Scratching the Surface” is a standalone episode presented as a half-hour HouseFlix documentary — the streaming offshoot of Kimmy (Ellie Kemper) and Titus’ (Tituss Burgess) cassette tape mail-order company of choice, Columbia House — “directed & everything by” DJ Fingablast (Derek Klena). “Kimmy Schmidt” die-hards will immediately recognize him as Douglas, Jacqueline’s (Jane Krakowski) dog masseuse/boy toy, from Season 2, and as the Mets party cruise DJ in the Season 3 finale. Profoundly, delightfully dim, Finga decides to film his quest to locate his childhood DJ idol, DJ Slizzard, aka Reverend Richard Wayne Gary Wayne (Jon Hamm), so he can ask him to spin at his wedding to Hello Hadid (Dierdre Reimold), model/U.S. Mint spokeswoman/third Hadid sister. Imagine his shock when he learns that ol’ Dickie Slizzard is behind bars for abducting Kimmy and the other Mole Women. But instead of walking away and looking for a new wedding DJ, Finga turns his passion project into an investigation to prove Slizzard’s innocence.

Directed by “Documentary Now!”’s Rhys Thomas and written by Meredith Scardino, the episode skewers every veritable true crime doc cliché — from moody opening credits and dramatic reenactments (starring Titus, natch) to establishing shots of planes landing and pensive, serious “what now?” moments, which in Finga’s case involves skipping stones. The payoff here is that Finga is terrible and he takes a detour to seek professional help from stone-skipping champion Damar Varnish (Tariq Trotter) at his estate, Rockswater. (Pro tip: Side-arm it.)

It’s a classic random “Kimmy Schmidt” gag, but it’s only partly what makes the episode so great. Expertly edited, “Party Monster” achieves the delicate high-wire act of balancing a hilarious spoof with trenchant takes on the men’s rights movement and toxic masculinity, all while maintaining the show’s trademark absurd humor with guest stars who rose to the occasion at the center.

Klena is superb as Finga, who is, for a lack of a better word, an idiot. He embodies the dumb white boy DJ stereotype to a T, but also imbues Finga’s ignorance and naïveté with a sweetness that you feel for him when he starts subscribing to #notallmen.

Hamm is once again firing on all cylinders as the Reverend. His (so far) only Emmy is for a drama (“Mad Men”), but the dude is never better than in comedic roles. (Frankly, he should’ve won in guest for “Kimmy” three years ago.) He continues to find new layers of both ridiculousness and cringey-ness in the Reverend, delivering some of the best line readings of the episode (see: the “dolphins are huge rapists” rant). And in one of the best marriages of reality and fiction, he was a great sport about the show incorporating embarrassing footage of him from a ‘90s dating show as a “flashback” to when the Reverend was passed over for a date. (Hamm had described his perfect date for a woman with a foot fetish as: “Start off with some fabulous food, a little fabulous conversation, end it with a fabulous foot massage for an evening of total fabulosity.”)

Finga and the Reverend team up with Fran Dodd (Bobby Moynihan), a men’s rights activist and the CF-Bro of The Innocence Broject, which is trying to exonerate such men as Bill Cosby, Harvey Weinstein and Lord Voldemort. Moynihan is fantastic channeling Fran’s simmering rage about the so-called “war on men” and his mother’s indecisiveness when ordering at restaurants.

The latter tale (and cutaway) comes up during the trio’s vent session that turns into a rage spiral against women. They come to the conclusion that they need to fight back lest they become casualties of “herstory” and that women shouldn’t have rights at all, while Finga’s goal morphs from trying to prove the Reverend’s innocence to trying to prove what the Reverend did wasn’t illegal in the first place. (In a far less hilarious — and very jarring — marriage of reality and fiction, the show also intersperses clips of President Trump denying sexual assault allegations by saying the women weren’t attractive enough.) It’s a tricky scene to pull off and “Kimmy Schmidt” walks the tonal line perfectly, showing the disturbing quickness and the ease with which men’s “fear of women” and misogyny balloon while keeping the jokes and cutting one-liners firing.

“Kimmy Schmidt” has never shied away from tackling serious issues, including sexual assault, in its heightened, surreal way, but the specificity and ambition of “Party Monster” is unlike anything it’s done before. The series has 16 Emmy nominations to its name, but no wins, and it has yet to crack the writing or directing categories. “Party Monster” is submitted in both races, along with guest actor for Klena and Hamm (Moynihan is submitted for “Kimmy and the Beest!”), editing, sound editing and sound mixing. And if voters watched “Party Monster,” they’d be monsters not to check off its name on the ballot.