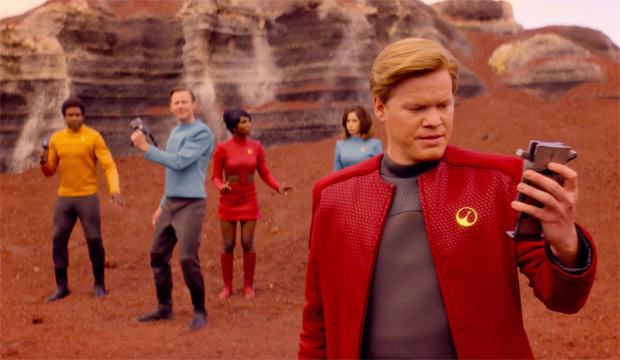 As Gold Derby predicted, Netflix’s “USS Callister: Black Mirror” has just won the 2018 Emmy for Best TV Movie. This all-important category jumped ship this year from the live Primetime ceremony to the Creative Arts, which were held Saturday, September 8 at the Microsoft Theatre. Netflix’s anthology series chooses to submit only one episode each year for Best TV Movie, a strategy that’s paid off handsomely now with two victories: “USS Callister” in 2018 and “San Junipero” in 2017.

“USS Callister” was the clear favorite to win Best TV Movie this year since it had a leading seven nominations, compared to five bids for “Fahrenheit 451” (HBO), two apiece for “Paterno” (HBO) and “The Tale” (HBO), and one nom for “Flint” (Lifetime).

This episode of “Black Mirror” stars Plemons as Robert Daly, a nerdy office worker who creates a virtual world where copies of his co-workers, including Cristin Milioti‘s Nanette Cole, are forced to play out “Star Trek”-like scenarios. While many of the virtual clones are complacent with this galactic world, new entry Cole takes it upon herself to try to break free.

At last year’s Emmys Netflix scored two big wins for “Black Mirror” thanks to the “San Junipero” installment: Best TV Movie and Best Writing for Brooker. Some of the most recent Emmy champs in this top category include “Sherlock: The Abominable Bride” (2016), “Bessie” (2015), “The Normal Heart” (2014), “Behind the Candelabra” (2013) and “Game Change” (2012).