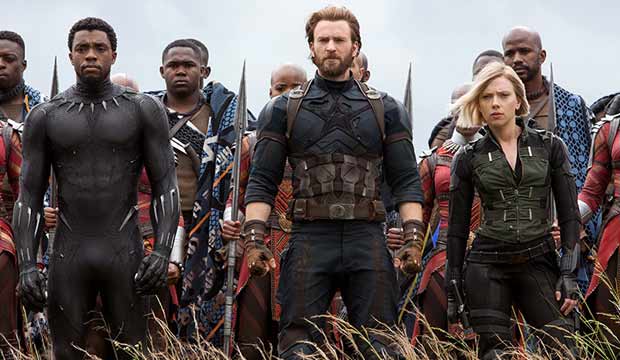 In 2008,  Marvel Studios launched a dynasty to last generations with the first of 19 (so far) MCU films in “Iron Man.” Ten years later and we are now at the culmination of this inter-connected, galaxy-universe with “Avengers: Infinity War.” This film is awe-inspiring. And that’s not just because of the amount of money it’s raking in (will James Cameron’s “Avatar” and “Titanic” finally displaced at the top of the money-grossing tree? Let’s hope so – this film deserves it!), but because of the filmmaking feat achieved by everyone involved led by Marvel show-runner Kevin Feige, including directors Joe and Anthony Russo, and

It’s an incredible experience (anyone else still shaking days after seeing the film) that, frankly, blew me away. For a long time now, we have all been wondering when a superhero film will be nominated for Best Picture at the Academy Awards – “Deadpool?” “Civil War?” “Wonder Woman? “The Dark Knight?” “Black Panther?” With the ever-increasing quality of the genre, it’s surely about time the beloved superhero blockbuster got some well-earned awards recognition. With that in mind, have a read through of five reasons this is the film that finally deserves a superhero Best Picture nomination.

Rave reviews
Every Best Picture hopeful, obviously, needs to win over the critics. No critics love, no awards love. Fact. It’s a good job, then, that “Infinity War” has this in, with many calling Marvel’s 19th outing it’s best – certainly it’s most ambitious. They all appreciated the spectacle, the craft and the boldness of “Infinity War.” “It is big, blustery and brave, taking viewers to places they may not be used to going,” declares The Washington Post’s Michael O’Sullivan. And Owen Gleiberman of Variety says: “taken on its own piñata-of-fun terms, it’s sharp, fast-moving, and elegantly staged. It also has what any superhero movie worth its salt requires: a sense that there’s something at stake.

It’s a brilliantly made movie
The visual effects for superhero films are always well-rewarded, with “Doctor Strange” the latest in a long line of them to be Oscar nominated for that. But the other areas of filmmaking are often under-appreciated. It seems odd to me that the consistently-iconic costumes are NEVER recognized. The same goes for their sci-fi-based sets, a genre which is often rewarded in the Production Design category. Why is that generosity not also extended to a “Guardians of the Galaxy” or “Thor” or a “Black Panther,” which combines sci-fi, tech and tradition in their excellent sets?

The acting, too, is also underrated. Some of you (by ‘some,’ I of course mean none) may remember my article a couple years back when “Civil War” came out, in which I argued greatly for Robert Downey Jr. deserving a Best Supporting Actor nod for his performance. He’s also brilliant, but so too are Boseman as T’Challa, Chris Evans as Cap and Cumberbatch as Doctor Strange. Tom Holland, in particular, has had a couple of emotional scenes in his films as Peter Parker that have really hit home.

Then we move on to the writing and directing. The Russo brothers and Stephen McFeely & Christopher Markus deserved to be nominated for their directing and writing, respectively. To cram all of those beloved characters into a gripping, twisting plot with emotional punches and intense set pieces capped off by a game-changing ending, is beyond nomination-worthy. “Infinity War” is this generation’s “Lord of the Rings: The Return of the King” and then some.

It exceede the hype
Films that take on material with pre-existing fan bases face a challenge before they’ve even had their first screening. Nay, before they’ve even had lunch on their first day of shooting. The fan bases have their own agendas, their own ideas about what should and shouldn’t be done with the stories and characters they adore so much. It’s no surprise, then, that so many superhero movies have crashed and burned. The Ben Affleck version of “Daredevil” felt the wrath of it’s fans, as have quite a few of tjerecent DC films (“Suicide Squad,” “Batman vs Superman” to name a few).

But the MCU, somehow, are constantly able to build up huge hype for each to their films AND then go and match that with their finished products. “Civil War,” although differing from the original graphic novel, was lauded for it’s achievement as a movie and “Infinity War” is the same.

Kevin Feige deserves the recognition
Feige has been Marvel’s overlord, having a creative and business hand in all 19 MCU films (and in the ones to come, too). For each film, he’s hand-picked the exact right directorial talent for the project and, crucially, allowed them to strut their stuff with their respective material – all the while ensuring each film links seamlessly with a dozen others and maintains that Marvel hue and ethos. Among the top helmers:  James Gunn (“Guardians of the Galaxy”), Taika Waititi (“Thor: Ragnorok”) and the Russo brothers (“Civil War,” “Winter Soldier,” “Infinity War”).

Feige also has a pretty damn good eye for casting, beginning with an at-the-time ballsy move to land Robert Downey Jr., continuing with spot-on castings for Spider-Man (Tom Holland), Doctor Strange (Benedict Cumberbatch) and Black Panther (Chadwick Boseman). Feige just continually gets it right, and his commitment to the MCU legacy is more than admirable. Surely he deserves some recognition for his work? A Best Picture nod would give him that.

Audiences love it, so why not academy members
There has been a growing disparity as of late between the tastes of academy members and movie-goers with the former eschewing blockbusters in favor of critically acclaimed fare. To quote Tony Stark at the beginning of “Iron Man,” is it too much to ask for both? The MCU movies make money and win over critics. And “Infinity War” is latest and greatest in the series.