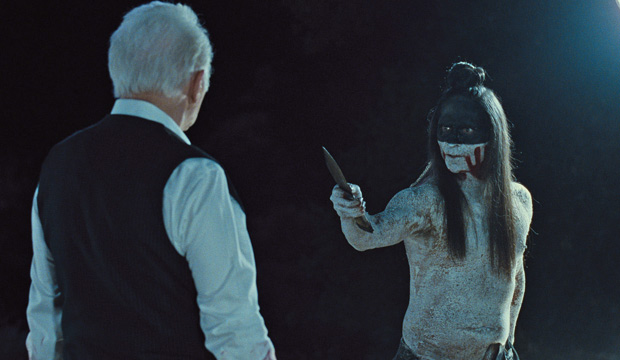 With the Season 2 finale just around the corner, “Westworld” hit pause on many of its concurrent storylines for a revelatory bottle episode. “Katsuya” focused on the Ghost Nation tribe, and how their leader Akechata (a career-best Zahn McClarnon) was intrinsically tied to the show’s greatest mysteries. Dive into Episode 8’s exploration of ancient “Westworld” lore below.

SEE2018 Emmys eligibility period ends May 31, unless you’re ‘Westworld,’ ‘The Handmaid’s Tale’ and …

He’s Alive! – Somehow The Man in Black (Ed Harris) survived the hail of bullets he took to the abdomen last week. He crawls to a river before collapsing. Ghost Nation leader Akechata comes to his aide, noting he “remembers” the bloodied man from some time ago. The Ghost Nation tribe heals William at their camp until his daughter Grace (Katja Herbers) comes to claim him. We don’t see anymore of William beyond this point, but the fact that Grace wants him to suffer means he may not be out of danger.

The Maze – Akechata is also looking after Maeve’s Daughter (Jasmyn Rae) at camp. “You can remember all the lives we’ve lived,” he tells her. “So can I.” The bulk of the episode beyond this point consists of flashbacks, as Akechata has been a staple of the park since its earliest days. He lived an idyllic life with his tribe, before they worse scary white paint and were known as Ghost Nation. But one day he discovers the aftermath of Arnold’s (Jeffrey Wright) “Wyatt” massacre. Arnold, Dolores (Evan Rachel Wood), and the other hosts lie dead in the street. Akechata walks into the bar and discovers the symbol of The Maze in its original wood carving. The symbol takes over his mind and he begins to carve it everywhere. This lasts until he and his people are reprogrammed as the vicious Ghost Nation, due to visitor’s demands for a brutal adversary. Yet Akechata maintains memories of the symbol after this change. Is he the first host to “wake up”?

Tea Party – During this time, Akechata has been keeping watch on Maeve’s Daughter. While Maeve (Thandie Newton) has a tea party with the young girl, she discovers the Maze symbol on a rock among her daughter’s toys. “The Ghost gave it to me” says her daughter, “It’s a warning. He’ll be watching us.” Considering this ancient Westworld figure has been looking out for the girl for decades, she must be even more important to the endgame than previously imagined.

The Door – Akechata stumbles across Logan (Ben Barnes) sometime after William sent him away on his horse, naked and bound. Logan is sunburned and losing his mind in the heat, muttering “this is the wrong world” and begging for a way out. “His words cracked something open in me” says the native. Back at camp he spots the host who played his wife in a previous build, Kohana (Julie Jones), and memories of his past life are resurrected. Realizing his life and this world may not be his true home, he rides farther than he has ever traveled until he finds a Delos facility on a cliff-side. He believes the strange structure to be a passage into another world: a door. This could be yet another name for “the valley beyond” or a new destination entirely.

“Take my heart when you go” – He steals Kohana in the night and rides away from the tribe. He washes off his white body paint and begins to “wake” her by using the couples’ signature words of love from their past life. “Take my heart when you go” he tells her. Her eyes widen as memories return: “take mine in its place.” The lovers prepare to venture out to The Door together, but Westworld workers in hazmat suits descend on Kohana and whisk her away to a facility before Akechata can stop them. To his horror, he finds a new host in her place back at camp.

Beyond Death – Unable to locate Kohana, Akechata allows himself to be killed in battle in hopes that he will find his love somewhere “beyond death.” This of course, places him in an underground Westworld facility. A female tech is shocked to discover Akechata is an “Alpha 2” host, a very early build. He hasn’t received any updates in close to a decade because it turns out this is the first time Akechata has died. The host is able to sneak out and explore the old Westworld facility. Eventually, he finds Kohana and other former tribe members in cold storage and is reduced to tears when he cannot wake them. Back inside the park, he tells his people of his findings but reassures them that he has a plan for keeping the tribe out of the reach of the Delos employees forever.

Waking Up – The plan revolves around the Maze. “I dedicated my life to sharing the symbol” Akechata tells Maeve’s daughter. “It means you can see.” As hosts in the tribe gain consciousness, he begins carving it inside their scalps anytime someone is killed. This explains why the Man in Black found the symbol inside the head of Ghost Nation warriors. His entire tribe appears to have been kept “awake” through this method. Akechata is also responsible for the mysterious Maze symbol in the dirt outside Maeve’s old house. This was his way of guiding the mother and daughter toward consciousness, though Maeve misinterpreted all his actions as hostile. Bascially, anytime we’ve seen the Maze in the series, Akechata was responsible for it.

Deathbringer – The biggest shocker among Akechata’s stories is his surprise meeting with Ford (Anthony Hopkins). Ford sits inside a frozen scene of Ghost Nation members attacking a bear. He is curious about Akechata’s behavior, and is busy scalping the hosts to examine the Maze symbol in each of their heads. When Ford asks how Akechata first discovered the symbol, the Native replies “when the Deathbringer killed the Creator.” This of course refers to the moment where Dolores murdered Arnold. “There is not one world but many. And we live in the wrong one” he tells Ford as he motions to the symbol. “This will help them find The Door.” Impressed with Akechata’s drive, Ford lets him in on the ultimate plan. “When Deathbringer returns for me, you’ll know to gather your people and lead them to a new world.” Thus Ford’s death at the end of Season 1 has the Ghost Nation on the move.

“Take mine in its place” – Sizemore (Simon Quarterman) apologizes to Maeve, who lies sliced open on an operating table with wires pouring out of her, for the misfortune humans have dealt her. A technician forces him from the room, seemingly more concerned with Maeve’s coding rather than restoration. But Akechata communicates telepathically with Maeve. He promises to take care of her daughter as his own and urges her to survive and join them. She recites Kohana’s words to him as a sign of acceptance.