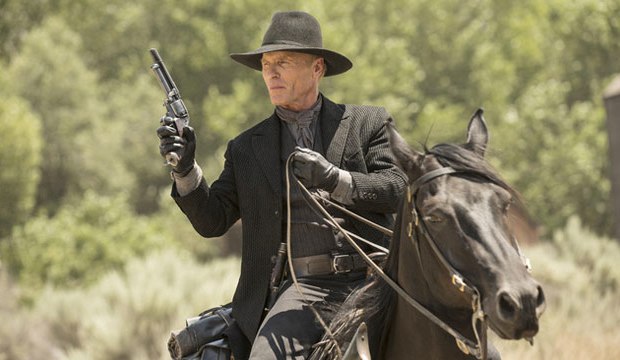 HBO’s “Westworld” has a reputation for asking viewers to inspect everything on screen for hidden meaning. In the penultimate episode of Season 2, “Vanishing Point,” one character questions every life decision he has ever made. The answers to his questions could have massive repercussions for the series going forward. Dive in to the shocking twists of Episode 9 below.

The Stain – As the camera pans over an opulent gala in a flashback, the Man in Black (Ed Harris) discusses a “stain” within himself during a voiceover. His wife Juliet (Sela Ward) is still alive during this flashback, drinking heavily during the party. “When did it creep in?” William asks as he envisions Dolores (Evan Rachel Wood) as a server. “Was it all in my head?” The disorienting sequence quickly cuts back to the park, where his daughter Emily (Katja Herbers) has taken him to a rally point. She tends to his wounds while waiting for a Delos team to find them.

The Valley Beyond – Ghost Nation tribesmen confront Dolores, informing her that the Valley Beyond “isn’t meant for you.” She disagrees, thinking their talk of protecting a “door” is simply part of their code. Another shackle to the human world. She commands Teddy (James Marsden) to take out the men. Dolores tells a dying warrior that “not all of us deserve to make it to the valley beyond,” and the audience realizes this is the scene glimpsed by Delos technician in the season premiere. It’s further evidence that the show is getting extremely close to the farthest known point in the timeline.

The Forge – Bernard (Jeffrey Wright) spies on Charlotte (Tessa Thompson). She has resurrected Clementine and embedded her with Maeve’s (Thandie Newton) “God code.” Charlotte commands Clementine to display her new abilities, having the host send a signal to nearby robots and commanding them to rip their neighbors to shreds. This appears to be Charlotte’s master plan for taking back Westworld. Bernard hurries to escape the facility with Elsie (Shannon Woodward). Ford (Anthony Hopkins) urges the host to kill Elsie, but Bernard disobeys his inner demon and comes clean about their mission. The hosts, he admits, are all headed to a facility known as “The Forge.” It’s similar to The Cradle, except it contains all the collected cognitive data of the park guests. He needs to reach The Forge before anyone else.

Maeve’s Fate – Hope is all but lost for Maeve, still lying cut open on an examination table. But Ford leaves one last message for the powerful madam. It turns out, the puppet master hoped for her to escape and live freely in the world. “Of all the hosts I made” he tells her, “you Maeve, were my favorite.” Though at first his speech seems like a eulogy, he whispers that she cannot let the humans live before kissing her head. For then unlocks her “core permissions,” which it’s safe to assume will make the fan favorite character even more powerful than previously seen.

One Final Game – During William’s flashback, he takes a break from the busy gala to sit alone at a quiet bar. But Ford is sitting at the opposite end, and the Man in Black is none too happy to see the park founder show up in his personal life. He reminds Ford of a deal they made: “Delos stays out of your stories, you stay out of the valley.” It’s intriguing that William mentions the valley by name here, but he cuts off the interaction before it has a chance to be explained further. Ford gives William a copy of his “profile,” a credit card size memory stick containing all of his Westworld history. William doesn’t want anymore games from the creator, but takes his profile card before Ford ominously promises “one final game.”

Slaughterhouse-Five – William and Juliet fight when they return home from the gala, with Juliet calling him a virus that has infected and killed her family. Emily witnesses the fight and tells her mother she will have to return to rehab to fix her unhealthy drinking habits. Williams puts Juliet to bed, but not before placing his profile card between the pages of a copy of “Slaughterhouse-Five” for safe keeping. Since nothing is by accident on “Westworld,” the title likely has meaning. It is worth noting that Kurt Vonnegut’s classic novel is heavy on flashbacks, just like this episode. It also features a protagonist named Billy, which Juliet notes is a nickname William loathes. Billy is a famous example of an unreliable narrator, which points to the ways “Westworld” deceives viewers and is important to a major twist this week.

The Game – The Delos team finally arrives to take William in for medical care, but William is in a confused state having just snapped out of a flashback to his wife’s suicide. Believing the men are all part of Ford’s game, he snatches a gun and mows them all down. Emily is horrified and tries to tell him they were real people. But William is unhinged, believing his daughter to be a host as well due to her knowledge of his profile. “I can show you” she pleads, reaching for something behind her back. But William shoots her point blank, noting that he never told Emily about the profile. He is about to cut into her, when he realizes she is holding his profile in her bloodied hand.

Deleting Ford – Elsie pulls the escape vehicle over so she can grab weapons from fallen soldiers. Tired of Ford’s constant commands to kill her, Bernard ties himself to the steering wheel and wires into his mainframe. Ford goads Bernard for making a mistake, “there is an origin of species to consider. We need to open the door.” But Bernard is able to block him out, find the files, and delete Ford from his mind. At least he hopes so. In an effort to keep her safe in case his plan didn’t work, he leaves Elsie behind and sets off for The Forge.

“Is this real?” – Feeling broken over killing his daughter, William places his gun to his head. Before he pulls the trigger, he again drifts back to the night his wife died. “Tell me one true thing” she asks him, before falling asleep. He starts the monologue from the opening of the episode about a stain, or darkness, inside himself. Juliet was the only one who sensed it. “Everything you feel is true” he says, “I don’t belong to you, or this world. I belong to another world. I always have.” Juliet grabs the profile once he leaves the room, and is confronted with his years of brutal violence in the park. She leaves the device in Emily’s jewelry box before heading to the bathroom to kill herself. Shots of William during different times in the series flash across the screen. William looks at his arm, both in the past and present, as he hears his wife ask him “is this real? Are you real?” He remembers wondering whether his actions were really his own and begins carving into his own arm in search of robotic parts. The camera cuts away before confirming whether he is a host or not.

Til Death – Teddy and Dolores halt their trek to the valley, prompting Teddy to reminisce about simpler days. Dolores was the first image Teddy saw when he was “born,” and has loved her ever since. “But you changed me, made me a monster” he says. He takes out his gun as Dolores warns him not to hurt her. “I could never hurt you Dolores. I’ll protect you til the day I die. Which is why this is so hard. I can’t protect you anymore.” Before she can protest, Teddy raises his gun and shoot himself in the head. Dolores cries over the body of the man she drove away, alone for the remainder of her journey.