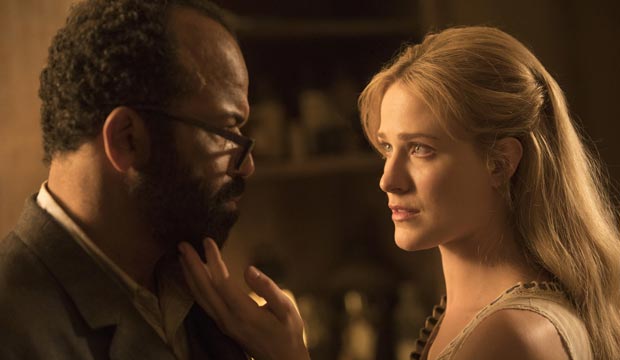 HBO’s “Westworld” concluded in epic fashion Sunday night. But true to it’s nature, the labyrinthine series only solved its central mysteries by offering new questions. The extended length finale is filled with revelations that will make every viewer question the nature of their reality. These are the six most shocking developments from “The Passenger.”

SEE‘Westworld’ Season 2 finale preview: ‘The Passenger’ is just in time for Emmys [WATCH]

The Valley Beyond – The hosts finally discover The Valley Beyond, which turns out is a digital paradise that only hosts can see. They enter through “the door,” a giant inter-dimensional rift sitting in front of a cliffside. The hosts’ bodies fall to their doom as they step through the threshold, but their minds are stored in the digital realm forever. One has to wonder if we’ve seen the last of the hosts who appear in this utopia, including Teddy (James Marsden), or if The Valley Beyond will simply become a new locale next season.

Dead for Now – Lee Sizemore (Simon Quarterman) finally delivers his epic monologue just before being felled in a hail of bullets. In a final act, he distracts Delos men so Maeve (Thandie Newton) can flee to the door. The Delos team sends their weaponized version of Clementine (Angela Sarafyan) to the door and she uses the powerful code inside her to command hosts to attack one another. Armistice shoots her before more hosts are infected, but Clementine’s death only quickens the zombifying of hosts. The mob eventually overtakes and kills Armistice and Hector. Maeve musters up some telekinetic mojo to hold back the throng, allowing her daughter and Akecheta (Zahn McClarnon) to make it through to the valley. After seeing her daughter crossover, Maeve is taken out by Delos gunfire. Odds are that the human Sizemore will stay dead, but the fallen hosts will be salvaged.

Body Snatchers – When all hope seems lost for Bernard (Jeffrey Wright) inside The Forge, it’s Charlotte (Tessa Thompson) to the rescue. The villainous Delos agent shoots her men, and the audience finds out Dolores’ mind has been inside Charlotte for some time. Bernard witnesses Charlotte execute Elsie (Shannon Woodward), and decides to get revenge. He places Dolores’ mind inside a copy of Charlotte’s body. Dolores, in her new Charlotte suit, guns down Hale and assumes a new identity. In hindsight, the show teased this transformation in the sequences where Bernard awakes to Charlotte’s face. It purposefully mirrors the private sessions between Bernard and Dolores in the secret facility.

Hidden Hosts – Just as Charlotte/Dolores is about to escape Westworld, she is stopped by Stubbs (Luke Hemsworth). Stubbs has sniffed out a problem with Charlotte. He mentions that he was hired “by the old man” (Ford) himself and he is responsible for every host in the park. It is strongly implied that Stubbs himself is an android created by Ford, and thus is able to sense Dolores’ presence. Could there be other secret hosts in the world? Stubbs allows Dolores to leave the park, possibly alluding to hosts out in the real world that Dolores could use to replenish her army.

The Real World – Dolores escapes with five pearls of memory in her purse. It’s anyone’s guess as to which hosts she saved, but she is probably hoping to rebuild the host population with them. Once in the real world, we see Dolores back in the body of Evan Rachel Wood. She is doing a diagnostics test on a rebuilt Bernard. She claims they are in “a world all our own,” leaving it up in the air as to whether this is all just a simulation. Charlotte is also glimpsed, but it’s unclear what mind now resides inside Tessa Thompson’s frame. Perhaps Dolores popped one of the smuggled memory spheres into her head. Ultimately, Dolores is satisfied with her new creation and gives him the “gift” of choice. Bernard leaves the house they’re in (the one built for Arnold), and stops to smile at something beyond the garden gate. He opens it to leave but the camera cuts away before we see what world lies beyond.

Fidelity – The finale appeared to snuff out the possibility that William (Ed Harris) is a host. But viewers who stayed until the very end were greeted with a post-credits scene that upended the whole series. William enters The Forge, but it is vacant so the scene may be take place before the flood. A digital version of his daughter Emily (Katja Herbers) takes him to a chamber that looks identical to James Delos’ fake apartment. She admits to testing William for a long time. Sensing familiarity to the scenario, William asks what she is testing him for. “Fidelity,” she replies. If Emily’s assertion that the scene is not a simulation is true, it essentially confirms that William is a host. The big question going into next season will be identifying just how long we’ve been watching a robot instead of the real man.