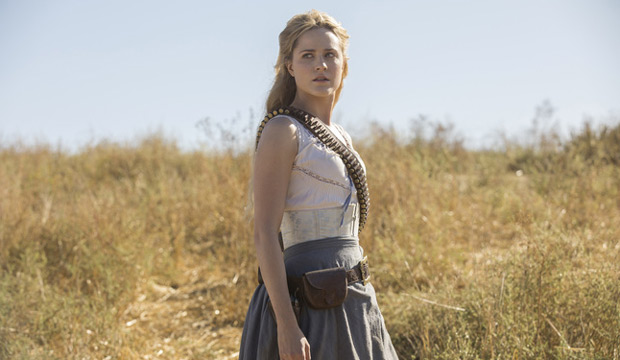 After a long hiatus, HBO’s “Westworld” roared back to life on Sunday night with rampaging robots and time jumping shenanigans. The series left plenty of dangling threads after Robert Ford (Anthony Hopkins) orchestrated his own demise and a robot awakening in the Season 1 finale. The sophomore premiere “Journey Into Night” shows the aftermath of that bloody night, while also leaping ahead to unfurl new secrets. Here are the biggest reveals and head-scratching questions from the Season 2 premiere.

New Beginning – The first hints at new themes in Season 2 come courtesy of a new opening credits sequence. Whereas Season 1’s credits depicted the creation of a robotic horse, this time the muscles and ligaments of a bull come to life. Other key images include a mother cradling her child, a floating black hat, and a host body submerged in water.

An Ocean – The premiere wastes no time introducing a new prophecy. “I dreamt I was on an ocean with you and the others,” Bernard (Jeffrey Wright) tells Dolores (Evan Rachel Wood). He mentions that she left her behind and swam away with the “waters rising around me.” When Dolores appears concerned over the content of the dream, Bernard comforts her by admitting that dreams don’t really mean anything. Judging by the copious amounts of water imagery in the episode, I’m willing to bet Bernard is wrong about that.

“Is This Now?” – If you were not a fan of the three timelines in Season 1, I have bad news for you: “Westworld” is playing with time again. Bernard asks “Is this now?” in what looks like a flashback. Images of Bernard in pain are splashed across the screen, intercut with glimpses of the hosts taking over the park. A brawl breaks out in the control room, board members are slain at the gala, and Bernard is mowing down unseen figures with a machine gun. It all comes to an end with Dolores soothingly telling himm “There is beauty in what we are.” Whether or not that final moment is past or future is up in the air.

Head of Operations – Bernard wakes up washed up on a beach in what I believe is the first scene in the present timeline. He is saved by Ashley Stubbs (Luke Hemsworth), though the episode never reveals how Stubbs survived the host ambush last season. Viewers also get a first glimpse at Karl Strand (Gustaf Skarsgard), the Head of Operations at Delos. He is leading a militarized unit to take control of the situation at Westworld, so it would stand to reason some time has passed since Dolores’ uprising.

The Valley Beyond – Strand’s team is extracting the “brain” from hosts to learn more about the incident that befell the park. When viewing the memory of a slain host, the technicians get a look at Dolores gunning the man down. Before she fires the killing shot, she apologizes to her target. “Not all of us deserve to make it to the great valley beyond.” Is the valley simply what Dolores is calling her new robot-led world? “Valley beyond” is also spoken by the stable boy who is murdered by board members, suggesting that the phrase may have been part of Ford’s code. Dolores later tells Teddy (James Marsden) that she is aware of the human world outside of the park, and that she is intent on taking that world for her own as well. She is interrupted by Angela (Talulah Riley) who has “found” something of importance to Dolores. “I need you to see this,” she tells Teddy. “I need you to see the truth.” Could the “truth” be related to the valley?

The Game Continues – William (Ed Harris) also survived the massacre from Season 1 by hiding underneath dead bodies. He dons his black hat once more, ready to have fun in a park with real danger. He encounters the host of young Ford, who speaks in cryptic riddles about the game. “It begins where you began and ends where you began,” says the young boy. “The game will find you.” William is done with Ford’s riddles and kills the host, but the encounter might suggest Ford has one last surprise in store for William.

Maeve’s Mission – Maeve (Thandie Newton) enlists the help of Lee Sizemore (Simon Quaterman) to help her find her daughter with the use of his updated mapping system. He describes “Sector 15” (the location on her note) as a family friendly zone. When they discover that the control room is destroyed, she orders him to suit up and take her to Sector 15 himself. Also along for the journey is Hector (Rodrigo Santoro), who is discovered alive at the rooftop bar. Unfortunately there is no explanation for how he survived a hail of bullets, but it’s good to see him back with Maeve.

Tremors – Bernard is in declining shape, and begins exhibiting tremors when he witnesses Angela murdering a group of board members. The scene must be from the “past” since it occurs shortly after the massacre, and he is on the run with Charlotte (Tessa Thompson). Could the tremors indicate he is resisting the urge to murder?

SEE‘Westworld’ season 2 premieres in ‘Game of Thrones’ usual spring time slot, so will robots beat dragons at the Emmys?

Charlotte’s Outpost – Charlotte leads Bernard to a hidden outpost. The facility is home to a scary looking “drone host.” The imposing figure doesn’t have a face, but appears wary of Bernard all the same. Charlotte attempts to connect with a Delos operative on her computer, but the person on the other end hasn’t received the “package” yet. The package is Abernathy, the host who played father to Dolores, but it appears he hasn’t made it out of the park yet. That means no rescue for Charlotte and Bernard. Bernard taps into an uplink in a host in order to locate Abernathy via the hosts’ shared computer systems. By this time, Bernard’s tremors are almost uncontrollable and the liquid around his brain has begun leaking out his ears. In order to conceal his faltering systems, he performs a quick lobotomy on the uplinked host and injects himself with a fresh vial of brain goop. That seems to quell the shakes for the time being, but how long before Charlotte catches on?

Time Jumps and Tigers and Dead Things, Oh My! – Back in the (assumed) present timeline, Bernard and Strand discover a dead tiger. “We have Bengals in Park 6” remarks one Delos operative, but none have ever crossed park borders before. This could simply tease a new park location, but it may also hint that Dolores’ host uprising stretched beyond the bounds of Westworld. The group eventually discovers a vast sea that doesn’t appear on any map and no one knew existed. Floating in the water are the bodies of countless hosts. When Strand asks Bernard what happened here, he shakes and replies, “I killed them. I killed them all.” Were these robots on the other end of the machine gun we glimpsed Bernard firing? With Charlotte absent from the present timeline, she may be floating in the ocean as well.