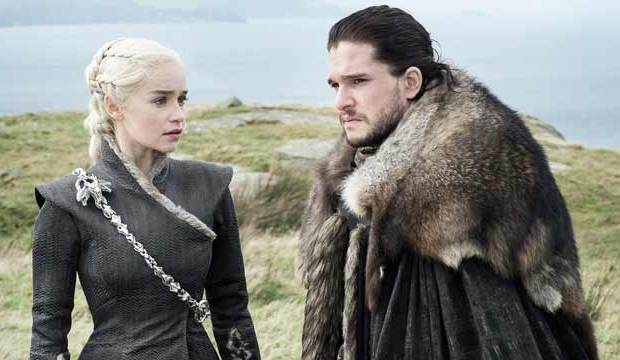 HBO announced Thursday that their Emmy-winning fantasy staple “Game of Thrones” will return for its final run of six episodes sometime in 2019. Our educated guess is that Season 8 will debut around April or May of 2019, just in time to be eligible for the 2019 Emmy Awards. In the past, “Game of Thrones” always premiered in this Emmy “sweet spot,” but last year’s Season 7 was delayed due to weather and didn’t air until the summer.

At only six episodes, “Game of Thrones” Season 8 will officially be the shortest season on record. The first six years all had 10 episodes, while Season 7 contained seven episodes. “Game of Thrones” is currently the Emmy record holder as the primetime show with the most wins of all time at 38. Now that winter is finally ending, expect “Game of Thrones” to rack up even more victories on its way out the (Ho-)door.

HBO also confirmed the writers and directors for the final season. Showrunners David Benioff & D.B. Weiss, David Nutter and Miguel Sapochnik are the directors for Season 8, while the writers will be Benioff & Weiss, Bryan Cogman and Dave Hill. Benioff & Weiss won Emmys for writing “Battle of the Bastards” (2016) and “Mother’s Mercy” (2015), while Sapochnik (“Battle of the Bastards”) and Nutter (“Mother’s Mercy”) prevailed in Best Drama Directing.

While the wait for the final season may be agonizing, there is a sliver of good news. The show’s mammoth cast should return in full next year — at least, those whose characters weren’t killed off in Season 7. Here’s the complete list of “Game of Thrones” series regulars who are listed in the opening credits: