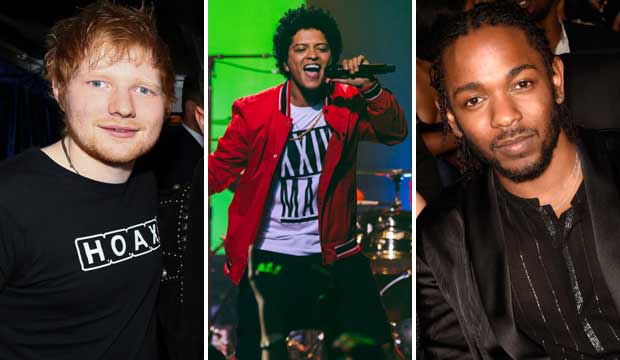 The 2018 Billboard Music Award nominations were announced on Wednesday, April 18, led by Kendrick Lamar, Ed Sheeran and Bruno Mars with 15 bids apiece. Will one of them win the prize for Top Artist of the Year when the awards are presented on May 20? You can now make your predictions in 14 categories here in our predictions center.

These awards are based on commercial success. Billboard has tracked a combination of album and digital song sales, streaming performance, radio airplay, touring and social media engagement from April 8, 2017, through March 31, 2018. So what matters the most is what has been on top of the charts.

Not necessarily. Drake has nine nominations, including Top Artist of the Year. And since these awards also consider the first three months of 2018 he poses a serious threat as he has dominated the Billboard Hot 100 this year with “God’s Plan,” which has racked up remarkable streaming numbers and spent 11 weeks at number-one. And Taylor Swift has five nominations including Top Artist. Her latest effort “Reputation” was the best-selling album of 2017.

Drake is the defending champion for the top prize, while Swift has won it twice before (2013 and 2015), so Lamar, Sheeran and Mars have the work cut out for them this year. Who do you think the front-runners are? Find out who wins when Kelly Clarkson hosts the Billboard Music Awards ceremony on May 20.

PREDICTthe Billboard Music Award winners now; change them until May 20