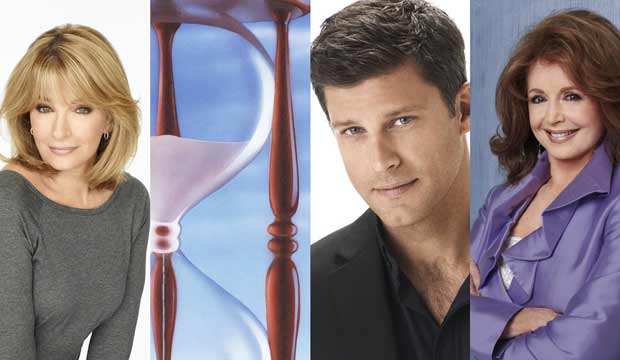 The 2018 Daytime Emmy Awards were handed out on Sunday night, April 29, during a ceremony held at the Pasadena Civic Auditorium in Pasadena, California, and streamed live on Facebook Live, Twitter, the NATAS website, and KNEKTtv. The event was hosted by Emmy winners Sheryl Underwood (“The Talk“) and Mario Lopez (“Extra”), but who were the big winners when the prizes were handed out? Scroll down to find out in our live blog with all the minute-by-minute results: who won, who upset, and who made history? Check out the complete list of winners here.

“The Bold and the Beautiful” was the big winner at the Creative Arts Awards held on Friday night, April 27. The CBS soap opera set in the Los Angeles fashion industry claimed seven awards, and it was up for several more at Sunday night’s main event, including Best Drama Series, which it previously won three times (2009-2011). According to our predictions going into Emmy night it was neck-and-neck with “Days of Our Lives” for the win in 2018. So which show ended up taking top honors?

But it wasn’t just daytime soap operas that were up for awards at this ceremony. The television academy also honored the best in talk shows, where “The Ellen DeGeneres Show” was hoping to extend its record as the most awarded talk show in history. “Jeopardy” also tried to extend its record as the biggest winner for Best Game Show. The best digital dramas, culinary shows, courtroom shows and morning shows were also celebrated.

Find out about all the winners below as they’re announced. All times listed are Eastern.

8:00pm — The Daytime Emmys are getting underway! There is a lot of potential history to be made with potential first-time winners like James Reynolds (“Days of Our Lives”) and John McCook (“The Bold and the Beautiful”), not to mention the records that could be extended by shows like “General Hospital” (Best Drama), “Ellen” (Best Talk Show) and “Jeopardy” (Best Game Show).

8:21pm — Chloe Lanier wins Best Younger Actress for “General Hospital.” This is the first win for Lanier on her second nomination as the villainous Nelle Benson. It’s the second straight win for “GH” in the category and the ninth overall, which makes “GH” the most awarded show in the history of the Best Younger Actress category. Watch Lanier’s Emmy winning performance reel here.

8:25pm — “Judge Mathis” wins the Daytime Emmy for Best Courtroom Show. This is the first win and second nomination for the series. The most awarded shows in this category’s history are “Judge Judy” and “Cristina’s Court,” which have won three times apiece.

8:35pm — Vernee Watson claims Best Guest Performer for her role as Stella Henry on “General Hospital.” This is the first win Emmy win and nomination for the veteran actress. And it’s the second acting win of the night for “GH.” How many more will it win before the night is over?

8:42pm — “Days of Our Lives” takes home the Emmy for Best Directing Team for the first time in its history. The show was awarded once for directing back in 1974 when it was awarded to an individual director and not for a team. It upset the front-runner “General Hospital,” which has won this award nine times before.

8:55pm — Rome Flynn (“The Bold and the Beautiful”) pulled off an upset by winning Best Younger Actor against the overwhelming favorite, Casey Moss (“Days”). This was the first nomination and first win for Flynn, and the fourth win in this category for “B&B.” Watch the scenes that won Flynn his Emmy right here.

9:00pm — Lidia Bastianich wins Best Culinary Host for “Lidia’s Kitchen.” This is her second victory in the category following a win for her previous series “Lidia’s Italy” back in 2013.

9:17pm — Lili Estefan wins Best Daytime Talent in a Spanish Language Program for “El Gordo y la Flaca,” beating two other nominees from her show, Raul De Molina and Francisco Fuentes. This is her first Emmy for the show.

9:23pm — Wayne Brady wins his first Daytime Emmy for Best Game Show Host for “Let’s Make a Deal.” This is high eighth nomination for the show, but he didn’t win for it until now. He previously won Daytime Emmys for Best Talk Show Host (“The Wayne Brady Show,” 2003-2004) and Best Original Song (“30,000 Reasons to Love Me” from “Let’s Make a Deal,” 2014). The teleprompter told Brady to wrap up his speech, but he fired back, “It too me nine years to get here, so suck it!”

9:27pm — “The Price is Right” wins Best Game Show for the eighth time, beating record-holder “Jeopardy,” which has won a whopping 16 times. “Price” last won this award in 2016.

9:32pm — “Days of Our Lives” strikes again by taking Best Writing Team after winning Best Directing Team earlier in the evening. This is only the third time “Days” has won this award after victories in 1976 and 2012. “Days” head writer Ron Carlivati previously won this award in 2008 for his work on “One Life to Live.”

9:45pm — Camryn Grimes wins Best Supporting Actress for “The Young and the Restless” for her role as Mariah. This is Grimes’s first Emmy since 2000, when she made history by claiming Best Younger Actress at age 10, which made her the youngest winner in history. “If only you know how this show changed the course of my life,” she said when accepting her award. She’s also the first actor to win Best Supporting Actress for playing an LGBT role. Watch the scenes that won her the Emmy right here.

9:49pm — “The Bay” wins Best Digital Drama Series once again. The streaming series swept the Creative Arts Awards with five wins out of the seven categories that were given out. This is the fourth year in a row that this series has claimed the top award for digital dramas.

9:53pm — “Good Morning America” is once again the winner for Best Morning Program. This is the sixth victory for the ABC series, which extends its record for the most win in the category, ahead of “Today Show” with four and “CBS Sunday Morning” with three.

10:01pm — Greg Vaughan (“Days”) upset his co-star Chandler Massey to win Best Supporting Actor on his first ever nomination after more than 15 years of work in daytime TV. Vaughan is only the second “Days” winner in this category’s history, following Eric Martsolf in 2014. Vaughan thanked his children by saying, “You are the wings that give me this moment.” Watch the scenes that won Vaughan his Emmy right here.

10:23pm — “We still command a vast, loyal audiences because these are great shows!” says Susan Seaforth Hayes upon accepting her Lifetime Achievement Award with her husband and co-star Bill Hayes. “Let’s give them plots that reflect our turbulent times,” adds Hayes. They advocate for equality for all genders, races and orientations. And “let us tell the truth. Our young viewers are on fire for it,” Seaforth Hayes adds.

10:27pm — “The Talk” wins Best Entertainment Talk Show for the second time in three years. It previously won in 2016. “This show has always been about friends and about our greater community,” said producer Sara Gilbert to the fans upon accepting the award. Watch our recent interview with the hosts of “The Talk.”

10:32pm — Steve Harvey wins Best Informative Talk Show Host for “Steve.” This is his second win in a row, but last year he won for his “Steve Harvey” talk show before it was retooled and re-titled simply “Steve.” Harvey’s daughter accepted the award on his behalf as he was unavailable to attend the ceremony.

10:56pm — “It took 37 years,” said James Reynolds upon accepting his Emmy for Best Actor for “Days of Our Lives.” That’s how long Reynolds has been in daytime TV before finally winning his first award tonight. He also paid tribute to the few other actors of color who have won Best Actor, including Al Freeman Jr. (“One Life to Live”), Darnell Williams (“All My Children”) and A Martinez (“Santa Barbara”). Reynolds is the first black actor to win since Williams in 1985. Watch the performance reel that won Reynolds his Emmy right here.

11:02pm — “Entertainment Tonight” wins Best Entertainment News Program for the fourth time. The award has only been given out for the last five years, so there has only been one year when “ET” didn’t win: 2016, when the award went to “Extra.”

11:16pm — Eileen Davidson wins Best Actress for “The Young and the Restless.” This is her second win for Best Actress, but her first win for playing Ashley Abbott on “Y&R.” She previously won this award in 2014 for starring on “Days of Our Lives.” Watch the scenes that won Davidson her Emmy right here.

11:20pm — “Days of Our Lives” wins Best Drama Series for the fourth time in its history. It previously won in 1978, 2013 and 2015. In all it won five awards tonight with its additional victories for Best Actor (James Reynolds), Best Supporting Actor (Greg Vaughan), Best Writing Team and Best Directing Team. This comes despite the show being complete shut out at Friday night’s Creative Arts Awards.