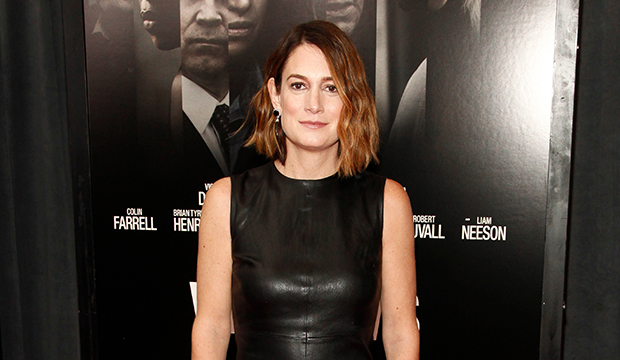 Three years ago, Gillian Flynn (“Gone Girl,” “Sharp Objects”) was snubbed in Best Adapted Screenplay at the Oscars for her “Gone Girl” script, adapted from her own novel of the same name. She’s back in the running this year with another adaptation that could land her first Oscar nomination: “Widows.”

Flynn co-wrote the heist thriller with Steve McQueen (“Hunger,” “12 Years a Slave”), who also directed the film. Based on Lynda La Plante’s ’80s TV crime drama series of the same name, the movie follows the titular widows, led by Veronica (Viola Davis), who plot a heist to pay off crime boss Jamal Manning (Brian Tyree Henry) after their criminal husbands are killed on a job. “Widows” is the second feature film Flynn has written following “Gone Girl.”

Though she was omitted at the Oscars, Flynn did receive Golden Globe and Writers Guild of America nominations for her “Gone Girl” screenplay, and even went home with the Critics’ Choice Award. An Entertainment Weekly writer-turned-novelist, she has seen all three of her best-selling novels, “Sharp Objects,” “Dark Places” and “Gone Girl,” adapted for either the big or small screen, so she’s definitely not an unknown name by any means.

Flynn could also score extra points — and get some podium time — thanks to HBO’s adaptation of “Sharp Objects.” She served as an executive producer and wrote or co-wrote several episodes of the Amy Adams-led limited series, so she could earn Best Limited Series at the Golden Globes as part the production team, which could catch Oscar voters’ eyes.

McQueen, too, could catch voters’ attention since his last movie, “12 Years a Slave” (2013), won the Best Picture Oscar, and he himself was nominated for Best Director. As John Ridley won Best Adapted Screenplay for that film, this would also be McQueen’s inaugural Oscar bid in a screenplay category.

However, the heist genre doesn’t have a good track record with the Oscars; in fact, heist movies are often considered campy, melodramatic popcorn flicks that have no emotional depth. While the stigma may still be present, “Widows” is a departure from the genre. It manages to weave real-life issues — police brutality, race disparity and gender roles among others — together with traditional heist elements.

Worth mentioning: While Flynn and McQueen may be draws for voters to check off “Widows” in Best Adapted Screenplay, the writers’ names aren’t actually listed on the ballot. It may just come down to how much voters liked the screenplay if they don’t happen to know who penned it. Could its underperformance at the box office and its B CinemaScore hurt it in that case?

In our combined Oscar odds, “Widows” is currently in sixth place with odds of 16/1, just behind “BlackKklansman,” “If Beale Street Could Talk,” “A Star Is Born,” “Can You Ever Forgive Me?” and “First Man.”

Do you think Flynn will finally reap her inaugural Oscar bid? Make sure to let us know in the comment section below.