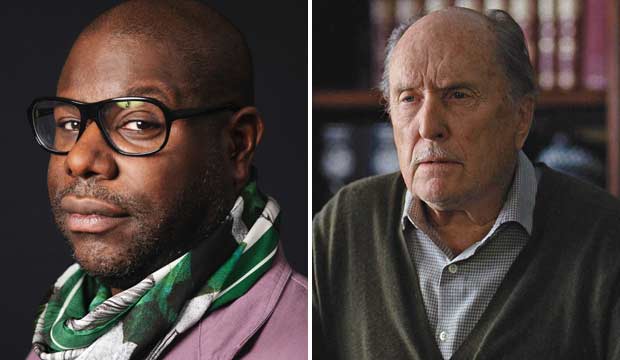 Steve McQueen says Robert Duvall didn’t know who he was. The “12 Years A Slave” director just laughed. “I called up Francis Ford Coppola, a director he did know, and he told him I was good. So that’s how Robert came along.” McQueen was dishing at our table in Modern on W. 53rd Street in New York City, next to the Museum of Modern Art screening room that had just unspooled his 129-minute action caper film “Widows.”

“Gravitas” is what drew McQueen to the 87-year-old Duvall. But it’s Viola Davis who has an almost fanboy crush hold on McQueen. “She’s one of the greatest actors of her generation,” he explained. Then he deadpanned to a big laugh, “She can do an underwater musical, there’s nothing she can’t do.” That includes slapping costar Elizabeth Debicki and taking a slap back from her. “Those were real,” McQueen said with a grin. His four leading women — Davis and Debicki, along with Michelle Rodriguez and Cynthia Erivo — came from different backgrounds to pull off this heist. “I saw myself in these four women,” McQueen admitted.

Based on a 1983 BBC series that McQueen admired, this version of the story, which he co-wrote with Gillian Flynn (“Gone Girl,” “Sharp Objects“), moved the story to Chicago. He liked the Windy City but thinks the movie reaches beyond it. “It has race, it has politics, it has corruption and religion, so yes it’s set in Chicago, but I wanted to make it global too.”

Oh, and Duvall needing a call from Coppola wasn’t the only casting glitch. “It was very difficult to get Michelle Rodriguez involved at first.” McQueen saw around a hundred actresses before circling back to the “Fast and Furious” star. “She didn’t want to play a subservient woman. It reminded her of her mother.” But he ultimately convinced her. “She wanted to distance herself from that character her whole life, so therefore she plays these dangerous tough women.” Mission accomplished.