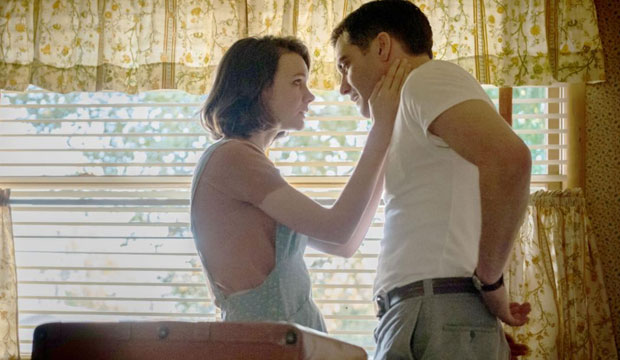 While “A Star is Born” is rightly being hailed as one of the best films of the year and one of the best directorial debuts ever, Bradley Cooper isn’t the only actor making his debut as a director this year. Paul Dano  — an actor who has appeared in such acclaimed pictures such as “Little Miss Sunshine” (2006), “There Will Be Blood” (2007), “Prisoners” (2013) and “12 Years Slave” (2013) —  helmed his first film,  “Wildlife,” this year. The IFC Films follows the story of a boy witnessing his parents’ marriage fall apart after his mother falls in love with another man.

Dano and his partner, actress Zoe Kazan adapted Richard Ford‘s novel. This labor of love stars Carey Mulligan and Jake Gyllenhaal as the parents and newcomer Ed Oxenbould as the boy. Critics praised this trio of talent for carrying the weight and emotional intensity of this intimate film. It merits an impressive score of 93 at Rotten Tomatoes based on the likes of the following rave reviews.

Nick de Semlyon of Empire says that “Gyllenhaal is excellent as the hangdog breadwinner, a man with obvious decency but whose pride prevents him from accepting his job back when he’s offered it.” But, he notes, “the film belongs to Mulligan, who delivers a complex, fiery performance that could be her best to date.”

Likewise, Glenn Kenny of The New York Times singled her out for praise: “The movie is anchored by Mulligan, who gives the best performance of any I’ve seen in film this year. The stiff simulation of determined cheer with which Jeanette often speaks has a vehemence to it, particularly in the sibilants she pronounces. Her physical bearing is also striking: In this role, Mulligan can say more by just tensing her neck than most actors can with a lengthy, impassioned soliloquy. It is mesmerizing to watch the character struggle with the question of whether or not she is entitled to her rage before she lets go and gives into it — and finds that doing so gives her no satisfaction whatsoever.”

Dano is being applauded for both his directing and writing. Kenny says that “his direction is meticulous in every respect, which enables him to keep the characters at a remove that is both clear-eyed and compassionate. And de Semlyon for Empire believes that “Dano and Kazan have crafted a richly detailed, melancholy, meditative drama that makes you fall in love with the three lead characters, then breaks your heart as their sorry saga unfolds. It’s a small story, but the emotions it kicks up don’t come much bigger.”