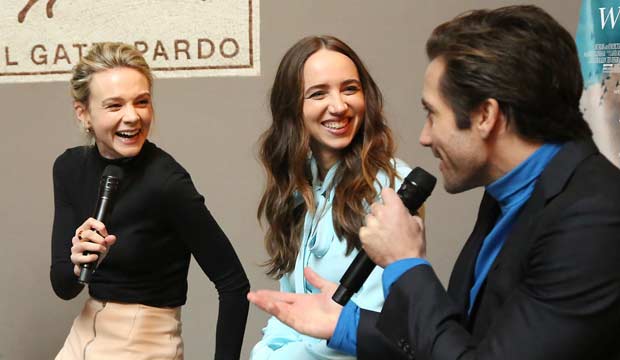 “Paul has wanted to direct a film since he first found out what a director really did.” That revelation about first-time helmsman Paul Dano (“Wildlife”) comes from a good source: his partner and frequent collaborator Zoe Kazan. With Dano prepping for his Broadway run in “True West,” the promoting on this day was left to Kazan and the film’s stars Carey Mulligan and Jake Gyllenhaal. “One of the things that drove me crazy about being with Paul for 11 years,” Kazan continued, “is he would read a script as an actor and say, ‘I just really don’t see the movie,’ and I’d say, ‘That’s not your job. If it’s a great part take it, pay the rent.’ But it’s always been like that.”

When I asked about any trepidation they might have had with a freshman director Gyllenhaal half-joked, “The real trepidation was from Zoe and not Paul.” Mulligan thinks that “it’s an inherent skill you have, and it’s just in his nature,” and Gyllenhaal agreed. He explained, “I think you just know when someone is a filmmaker. You know from meeting them in-person: the things they say, what they’ve chosen to say, the way in which they speak. There’s something going on there. So you could say someone is a first-time filmmaker, and I would say, ‘I knew it from somewhere in my instinct.’ It doesn’t feel like a first when they know what they’re doing.”

Adapted from Richard Ford‘s novel of the same name, “Wildlife” stars Mulligan is Jeanette, a complex woman whose self-determination and self-involvement clash with the values and expectations of a 1960s nuclear family. Gyllenhaal plays her husband, who loses his job and wants to leave home to fight a nearby wildfire. The novel was irresistible to Dano, according to Kazan who co-wrote the screenplay with him. “He became really obsessed by the book,” she said. “Something grabbed him. I think he read it like 17 times.”

And while there is some of the book on the screen, the pair took liberties in their adaptation. The ending, for example, which I won’t give away, grew out of one tossed-off line in the book about a job for the couple’s son, played by then-15-year-old Australian Ed Oxenbould. Still, Kazan said the story grew largely from the source: “So much of it was in the book, in the writing. It’s so profound and beautiful. It was really hard for us to let go of some of the language. It’s always a challenge.”

SEECarey Mulligan (‘Wildlife’): Reactions to her character show how we hold women to different standards than men [EXCLUSIVE VIDEO INTERVIEW]

But at this midtown luncheon for academy voters and a few journalists — my Gold Derby colleague Tariq Kahn among them — the stars heaped praise on the man behind the camera.”My biggest concern is I might do less,” Mulligan confessed. “Paul completely got that. And his instinct was to always push me. And I couldn’t have done it without him doing that.”

“All the characters were very specific but yours to find,” added Gyllenhaal. “Zoe and Paul knew the movie they wanted to make and the story they wanted to tell.” As for any family resemblance between Oxenbould and his on-screen parents, Mulligan laughed and said, “A lot of people think he looks exactly like Paul Dano.” Ah, but does he want to direct?