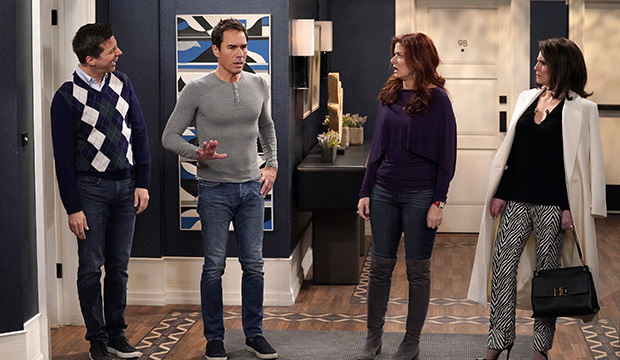 “Will & Grace” is one of three shows — the others being “All in the Family” and “The Golden Girls” — whose entire regular cast has won Emmys. But its four stars, Eric McCormack, Debra Messing, Megan Mullally and Sean Hayes, have very different Emmy resumes that could diverge even more this year with the revival. Will all of them make it back?

Mullally has the best Emmy history of the four. After breaking in and winning Best Comedy Supporting Actress for the second season in 2000 — when the show also won Best Comedy Series — she was nominated for the rest of the sitcom’s original run and took home her second Emmy for the eighth and (then-)final season in 2006. She is the only cast member to have won multiple Emmys for the show. Mullally, who has a stellar episode in “Rosario’s Quinceanera,” is in third place in our odds, behind Kate McKinnon (“Saturday Night Live”) and Laurie Metcalf (“Roseanne”), but has Experts Robert Rorke (New York Post) and Matthew Jacobs (Huffington Post) picking her for the win.

Messing was the last of the four to win an Emmy, completing the group sweep in 2003 on her fourth Best Comedy Actress nomination. She was snubbed the next two years, but returned to the lineup for final season in 2006. Messing is currently in the precarious sixth and final spot in our odds.

McCormack has the most uneven Emmy track record of the quartet. He has “only” four nominations, winning in 2001, and was infamously snubbed in 2002 — when he was announcing the nominations. He made the cut in 2003, was left off again in 2004, returned again in 2005 and missed again for the final season in 2006. McCormack was the only one to receive a Golden Globe nomination for the revival, which means a lot and nothing at all since “Will & Grace” is 0-29 with the Hollywood Foreign Press Association. In fifth place in our odds, McCormack is the No. 1 pick of Expert Rorke.

Do you think all four can make it back in the Emmy race? Vote below!