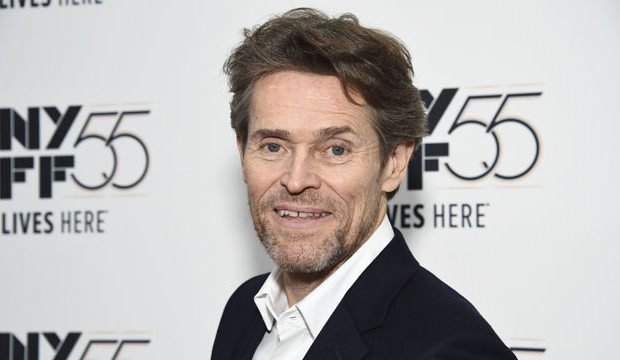 When you see “At Eternity’s Gate,” which opens Nov. 16, sit back and sink into Willem Dafoe’s remarkable performance as the Dutch post-impressionist painter Vincent Van Gogh. This is not Kirk Douglas in 1956’s “Lust for Life” or last year’s animated “Loving Vincent.” Fimmaker Julian Schnabel, an artist himself who previously cast the actor in 1996’s “Basquiat” and 2010’s “Miral,” places his star and us in the middle of the rustic French countryside with paint, brush and easel. At one point, Dafoe covers his face with dirt, becoming one with the outdoors. We see nature through his gaze, as he thickly slathers paint on his canvas to create a visceral work of art.

At 63, Dafoe is far older than the tortured Vincent, who died from suicide at 37. But, at some point, you will think that with his chiseled cheekbones and perceptive eyes, “Of course, he should have embodied this misunderstood genius long ago.” He wowed the crowds at the Venice International Film Festival and took the Volpi Cup as best actor. That prize, however, rarely translates into Oscar glory. But there are some glowing reviews to be found, such as this one from The Playlist: “Van Gogh is returned to his human dimensions, by a keen script and wonderful lead performance, while still being held up as an example of the artist’s ability to transcend time.”

SEECheck how our Oscar Experts rank the race for Best Actor

But given that Dafoe has had quite some career since his uncredited debut in 1980’s misbegotten Western “Heaven’s Gate” as a cock fighter, I would be more than fine if he was honored for his entire resume of 100-plus films. As is often the case, “Gate” isn’t even his only film this year. He is a narrator in  the upcoming “Vox Lux,”  his Nuidus Vulko rides a armor-covered shark in “Aquaman” and he does a voice in the animated film “Manou the Swift,” about a bird who is surprised to learn he isn’t a seagull.

Dafoe boasts both art-house cachet in movies by Abel Ferrara and Paul Schrader and blockbuster cred thanks to his arch-villain Green Goblin in the first “Spider-Man” franchise in 2002. He has played the title role in Martin Scorsese’s “The Last Temptation of Christ” (1988) and was the twisted male lead in Lars von Trier’s sexually graphic and extremely violent “Antichrist” (2009).

This guy also seems to be Teflon-coated when it comes to turkeys. He somehow came away unscathed from 1993’s kink-a-thon “Body of Evidence,” even after Madonna poured hot wax on his nether regions. He also kept afloat after being the baddie in the sub-par 1997 sequel  “Speed 2: Cruise Control.” As for being up for Razzies for both, he just shook those off and moved on.

As for Oscar recognition, he has made it to the ballot three times – all for supporting parts. After a string of villainous roles early on, director Oliver Stone cast Dafoe as the saintly sergeant  opposite  Tom Berenger’s evil one in 1986’s Vietnam-War-themed  Best Picture “Platoon.” Michael Caine, however, was overdue for recognition and got it as a philanderer in Woody Allen’s “Hannah and Her Sisters.”

For his next try at the little gold man, Dafoe achieved something that Bela Lugosi and Robert Pattinson never did. Namely, being nominated as a creature of the night. His role in 2000’s “Shadow of the Vampire” imagines that silent star Max Schreck doesn’t just play Count Orlock in “Nosferatu.” He actually is a bloodsucker. Alas, superhot Benicio del Toro triumphed as a border cop in Steven Soderbergh‘s“Traffic.”

SEEWatch the trailer for ‘At Eternity’s Gate’ starring Willem Dafoe

Last year, Dafoe came this close to winning as Bobby, the down-to-earth guardian angel of the families who are forced to live in a roadside motel near Disney World in “The Florida Project.” For once, he was allowed to be an average human who emblemizes the best in us.  But along came Sam Rockwell, striking gold the first time out for his racist cop in “Three Billboards Outside Ebbing, Missouri,” and Dafoe once again went unsung.

So what does Dafoe have to do? Right now he sits at No. 8 in the lead actor category according to Gold Derby’s 26 Experts. He fares a bit better in the No. 6 spot with combined picks by Experts, Editors and Users, with 83 picking him to win. With a bit of a shove, Dafoe’s chances with “Gate” could swing wide open come Nov. 16.