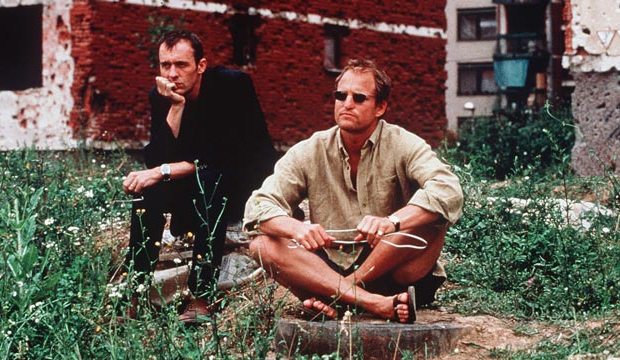 Woody Harrelson received his third Oscar nomination for his work in the 2017 film “Three Billboards Outside Ebbing Missouri” starring Frances McDormand. The highly acclaimed performance continues a 30-year career that has brought the actor acclaim for both his comedic and dramatic work.

Harrelson started his career on the Broadway stage as an understudy in the hit Neil Simon play “Biloxi Blues.” Just months after that play opened Harrelson would become a household name when he started playing the role of Woody Boyd in the fourth season of the highly successful sitcom “Cheers.” Harrelson faced a daunting assignment when he joined the show since he was replacing the popular Nicholas Colasanto who played Coach on the first three seasons but sadly passed away during the show’s run. Harrelson clicked with the cast and audience and went on to receive five Emmy nominations for “Cheers” and won the 1989 Best Comedy Supporting Actor award for his role as the naïve bartender Woody Boyd.

That success on “Cheers” launched Harrelson into a lengthy film career even before the show ended its 11-year run. That included his other two Academy Awards nominations for “The People vs. Larry Flynt” (1996) and “The Messenger” (2009). His movie choices have included popular hits such as “White Men Can’t Jump,” “Indecent Proposal,” “Kingpin,” “Zombieland,” and “The Hunger Games” franchise plus critical smashes like “The Thin Red Line,” “North Country,” “No Country for Old Men,” and “Seven Psychopaths.”

15. WELCOME TO SARAJEVO (1997)
This acclaimed but little seen film features Harrelson as Jimmy Flynn a high profile American journalist covering the war in Bosnia and Herzegovina, a country that formed after the dissolution of Yugoslavia. Harrelson is brash and egotistical as the star journalist who proclaims that no one has heard of Yugoslavia, but everyone has heard of him.

14. NORTH COUNTRY (2005)
Harrelson has a quieter and more low-key role than he usually plays as a lawyer helping female factor workers file sexual harassment lawsuits over the way they have been treated in a Minnesota iron mine. Charlize Theron and Frances McDormand received Oscar nominations for the film but Harrelson is equally effective in his scenes where he is cross examining the people being sued.

13. THE HUNGER GAMES (2012)
Harrelson plays Haymitch Abernathy a man who won the Hunger Games 25 years prior to the film’s setting but whose life has degenerated into decades of alcoholism due to his unhappiness with having to participate in the games. By virtue of his win he is obligated to coach the lead characters played by Jennifer Lawrence and Josh Hutcherson.

12. THE COWBOY WAY (1994)
While the movie itself is only average Harrelson is at his most appealing and comic in this story of two rodeo stars traveling across country to find a missing friend. The script is just minor stuff but Harrelson is quite funny and likable in the film and has some wonderful physical comedy moments especially one including an oddly placed cowboy hat while he is caught naked.

11. INDECENT PROPOSAL (1993)
Adrian Lyne knew how to provoke headlines for his films and stir national debate among the media zeitgeist during this period of time. In this film Harrelson plays the husband of Demi Moore. They are a couple with financial difficulties who go to Las Vegas with hopes of gambling their way out of a financial hole. Their gambling hopes fail but while they are there they meet Robert Redford as a billionaire who offers the couple one million dollars to spend one night with Moore.

10. WAR FOR THE PLANET OF THE APES (2017)
Critics largely thought that Harrelson’s role as The Colonel was done as a bit of a homage to the Colonel character Marlon Brando played in “Apocalypse Now.” Harrelson plays a highly mentally unstable man who tries to force the apes off their land that they are now peacefully inhabiting.

9. THE THIN RED LINE (1998)
Harrelson has a key supporting role in this film by the reclusive but highly respected director Terrence Malick. While newcomers filled out the main roles Malick assembled a who’s who list of actors for the supporting parts including Sean Penn, Nick Nolte, John Travolta, George Clooney and John Cusack. Harrelson plays a platoon leader and holds his own amongst the all-star cast.

8. ZOMBIELAND (2009)
Harrelson had one of his biggest box office hits in this post-apocalyptic comedic horror film where zombies have taken over the planet. While zombies have literally been done to death (so to speak) in recent film and television, “Zombieland” stands on its own as a unique take on the genre. The Chicago Tribune described Harrelson as “having a high old time as humankind’s last best hope.”

7. SEVEN PSYCHOPATHS (2012)
Harrelson first teamed with director and playwright/screenwriter Martin McDonagh on this dark comedy which as the title suggests follows the exploits of seven psychopathic characters. Harrelson plays Charlie Costello a particularly violent gangster who is still quite devoted to his Shih Tzu dog.

6. NO COUNTRY FOR OLD MEN (2007)
Harrelson had a supporting role in this Joel and Ethan Coen 2007 film that won four Oscars (Best Picture, Best Directors, Best Adapted Screenplay and Supporting Actor for Javier Bardem). In a large ensemble cast full of stand-outs Harrelson still makes a strong impact in what was one of his most acclaimed and rewarded films at the time.

5. NATURAL BORN KILLERS (1994)
Easily the most controversial film in Harrelson’s filmography is this 1994 Oliver Stone film. Released shortly after O.J. Simpson’s murder of his ex-wife Nicole Simpson and Ron Goldman, the film harshly lampooned the public and media’s fascination with criminals and true crime stories. Harrelson and Juliette Lewis play a latter day “Bonnie and Clyde” who go on a murderous killing spree for which they crave public recognition and notoriety.

4. THREE BILLBOARDS OUTSIDE EBBING, MISSOURI (2017)
Harrelson teamed again with director Martin McDonagh for this story of a mother’s obsessive campaign to bring her daughter’s murderer to justice. For his role as the sheriff whom McDormand hounds to find the killer, Harrelson earned his third Oscar nomination.

3. WHITE MEN CAN’T JUMP (1992)
Unlike the title, Harrelson played a white man who could jump. He plays a hustling basketball player who joins street games to pick up money to pay off his gambling debts. This was one of Harrelson’s early hit films as he was about to transition from his role on TV in “Cheers” to full fledged movie stardom in the coming years. Harrelson has wonderful chemistry with co-stars Wesley Snipes and Rosie Perez.

2. THE MESSENGER (2009)
Harrelson received his second career Oscar nomination (as Best Supporting Actor) for this film about an alcoholic army officer whose job it is to notify families of people killed in action. The Orlando Sentinel raved about Harrelson’s work in this film saying “Harrelson gives us layers of hurt under a callous yet needy crust. It may be the best performance of his career and certainly deserves Oscar consideration.”

1. THE PEOPLE VS. LARRY FLYNT (1996)
In another controversial film Harrelson gives a tour de force performance as pornography publisher Larry Flynt who goes through various difficult periods in his life from the death of his true love (rock star Courtney Love in a surprisingly nuanced performance,) an assassination attempt that leaves him paralyzed and ultimately a free speech battle before the United States Supreme Court against right wing evangelist Jerry Falwell (which Flynt actually won). The film earned Harrelson his first Oscar nomination (as Best Actor) for this film but the controversy surrounding the film took its toll on Harrelson.