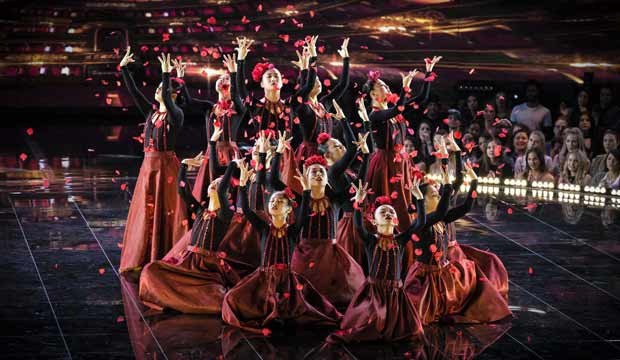 Six more dance acts performed in “World of Dance” season two, episode two. It was “The Qualifiers 2,” when the performers needed to average 80 or more from the panel of judges in order to advance to the next round of single-elimination “Duels.” So who made it through, and who came away disappointed?

The highest score of the night went to the Junior Division duo of Charity and Andres, a pair of 17-year-old contemporary dancers who delivered an impeccable routine with strong chemistry that Jennifer Lopez called “magical” and that Ne-Yo considered a “million-dollar” routine. Ne-Yo scored them 97, while Lopez was close behind with 96, and Derek Hough was the stingiest with a still-stellar 93, giving them an average of 95.3.

Not far behind was another team of young performers. The Junior Team Division contestants called the Fabulous Sisters hail from the city of Fukushima, Japan, which was the site of a devastating earthquake and nuclear disaster in 2011. There was too much radiation to even play outside, but it didn’t hurt their dancing. “It was so theatrical, so dramatic,” said Hough. Lopez thought it was “riveting.” And it made Ne-Yo “anxious” to see what else the young women have up their sleeves. They scored 94 from Ne-Yo, 93 from Lopez and 97 from Hough for an average of 94.7.

The youngsters owned the night, but the third best performance based on the judges’ scores came from an Upper Level duo. BDash and Konkrete are krumpers, a typically improvisational style of hip-hop dancing. But they melded that style with synchronized choreography that was “perfect,” according to Ne-Yo. Lopez appreciated that it had “that nasty krump quality” while also being “so damn smooth.” They received 96 from Ne-Yo, 93 from Lopez and 94 from Hough for an average of 94.3.

Of the other three performances, two of them scored 90 or above in what turned out to be a night of highly accomplished dancing all around. Representing the Junior Team Division, The Lab opened the show with their “World of Dance” comeback after they appeared in season one of the NBC reality competition series. Lopez thought they were “a force to be reckoned with.” She and Hough scored them 95, while Ne-Yo gave them 92, averaging them out to 94. Maybe this time they’ll reach the million-dollar world final.

Connection, an Upper Team of hip-hop dancers, found comfort in dance, which “saved their lives” in Chihuahua, Mexico. Lopez loved their “dynamic” routine and gave them a 92, while Ne-Yo and Hough both scored them 90, giving them an average of 90.7.

The only controversial performance was by the sexy Russian duo Pasha and Daniella, who performed a passionate ballroom number that divided the judges. Lopez thought they were “stunning,” but Ne-Yo wasn’t as impressed as he had been by other ballroom performances in the past. Ne-Yo gave them a 79, which was under the threshold of 80 needed to advance. So it was lucky for them that they got a boost from Lopez (93) and Hough (87). That brought their average up to 86.3, which put them comfortably through to the next round.

So it turns out that everyone left happy in week two of “World of Dance.” Of the 13 performances we’ve seen in the “Qualifiers” round so far only one has failed to advance to “The Duels”: veterans Hilty and Bosch in the season premiere episode. Did you agree with the judges’ scores in Tuesday night’s show? Vote in our poll below to let us know who gave the best performance.