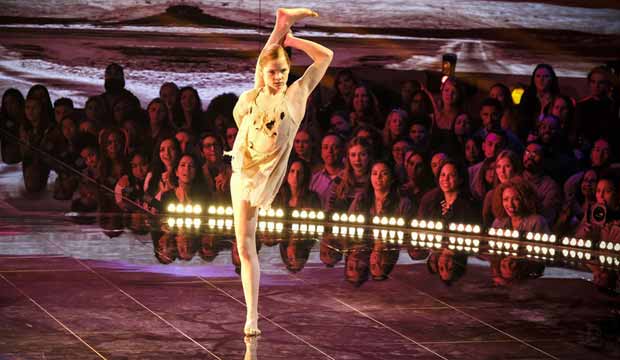 How do you follow up a performance like Eva Igo‘s? She stole the show in week four of “World of Dance,” easily advancing to the next round. On June 26 the international competition aired its fifth week of “Qualifiers,” in which contestants need to score an average of 80 points from the judges to move on to “The Duels.” So who stood out the most in this week’s show? Find out below in our live blog with all the developments as they happen.

Last week wasn’t Igo’s first appearance on “World of Dance” — far from it. She not only competed in season one, she was the runner-up, finishing close behind champions Les Twins from the Upper Division. Does that give her an advantage this year? Maybe not.

Igo comes in with higher expectations given her prior experience on the show, but while judge Ne-Yo called her a “joy to watch” and her performance gave Derek Hough chills, her average score of 95 was only the third best Junior Division score we’ve seen this season so far, behind Sean and Kaycee in week one (96) and Charity and Andres in week two (95.3). As good as she is, she’ll need to up her game even higher to succeed this time around.

But that was week four. Who wowed the judges in week five? Did anyone come close to the near-perfect score received by Karen y Ricardo in week one? Find out below with our minute-by-minute recap starting at 10:00pm. All times listed are Eastern.

10:00 p.m. – The biggest dance competition in the world is back! Tonight, the Qualifiers continue as the best of the best compete for the $1 million prize. Let’s get started!

10:06 p.m. – Up first is a contemporary group named Embodiment. It is an crew of 13 male dancers who have danced with some of the top entertainers in the business including J-Lo herself. Is this fair? I’m sure she’ll be impartial. Dressed in gray, drab clothing, their motion is front and center. These guys truly are incredible! Their athleticism and synchronicity is insane. They could probably each compete as individuals if they wanted to, but as a group the entertainment value has been taken up a notch. Bravo!

10:08 p.m. – Jennifer complimented their technical abilities and choreography, but she she wasn’t blown away. She may actually be more tough on this group because she knows their leader. Derek thought they could use more musicality, but they have the tools to be great. Ne-Yo complimented their ability to exude masculinity and grace at the same time. Rudy, the choreographer, made a mistake by saying he wanted to make his mark, not necessarily make it to the end. Jennifer reminded him it takes a killer instinct to be successful so they better be in it to win it! For their scores, Ne-Yo gave them 80, Derek 86 and Jennifer 88 for an average score of 84.7. Embodiment is moving to the Duels! Apparently I liked their performance more than the judges did.

10:16 p.m. – Second to the stage are Daniel & Mishella, a junior ballroom duo that has won 10 national championships and four international championships. Daniel looks like a mini-me of Derek, so let’s see if he’s got the same skills! The pair of them definitely have impressive footwork and flexibility. They never let their feet off the gas as the performance continues and definitely gave a solid performance. Will I remember it tomorrow? Not likely. But they’re adorable.

10:18 p.m. – Derek told them he was nowhere near as good as them when he was 10 years old. He did advise them they need to push the difficulty in their routine. Jennifer enjoyed their joyous performance personalities and thought they were “outstanding.” Ne-Yo’s critique was that they could tighten up their moves just a little. For their scores, Ne-Yo gave them 80, Derek 81 and Jennifer 87 for an average of 82.7. Daniel & Mishella squeaked into the Duels!

10:25 p.m. – Next up are Marissa & the Heartbreakers, a crew of female dancers who love to dance in their high heels. The group encourages women to love their bodies and not let anyone tell them what to do. With this routine, they are definitely giving off major sex appeal. Hair flips and puckered lips don’t completely distract from their truly intricate dance moves. I feel like I’m watching a Pussycat Dolls Las Vegas revue. I loved it, but what will the judges think?

10:27 p.m. – Jennifer called it a “good” routine but believes they are capable of much more. Derek complimented the cleanliness of their performance and particularly liked when one performer put “her butt on her head (a contortion move).” Ne-Yo called it strong and sexy, but warned them not to overplay it. For their scores, Ne-Yo gave them 83, Jennifer 86 and Derek 82 for an average of 83.7. The Heartbreakers are moving on!

10:36 p.m. – Next to perform is Madison Brown, a 12-year old contemporary dancer in the junior division. She had to move around a lot as a child because of her father’s job, so her mother always enrolled her in dance classes wherever they went to help her make friends. Now she’s ready to perform on the world’s biggest stage. Madison is a stunning dancer that performs far beyond her years. She has incredible flexibility and performs gymnastics moves across the stage with ease. There were a few moves that could have been cleaner, but the girl is amazing for 12 years old.

10:38 p.m. – The judges were absolutely shocked to learn Madison is only 12. Jennifer said she had a womanly quality to her dance, but needs to bring more emotion. Derek loved her maturity and personality. For their scores Ne-Yo gave her 84, Jennifer 88 and Derek 89 for an average of 87. Madison soared into the Duels!

10:44 p.m. – Next up is a four-person hip-hop crew called Freshh. They bring major energy to the stage and definitely have the best “stank face” of the night. This is a crew audiences would love to see perform, but I’m not sure they have the technical choreography required for this series. But the raw energy alone is enough for me to want to see them again.

10:45 p.m. – Ne-Yo enjoyed their cleanliness and arsenal of movement, but wanted them to have more fun. Jennifer called it “stinky funky” and felt they had impressive cohesion. Derek complimented their footwork, but wants to feel more from them. For their scores, Ne-Yo gave them 83, Jennifer 84 and Derek 85 for an average of 84. Freshh is moving to the Duels!

10:49 p.m. – Next are the Silver Beats, an Afrodance crew that is hoping to represent Africa in the world’s biggest dance competition. Their head choreographer has worked with some of music’s top stars, including Childish Gambino is his recent viral video for “This is America.” They hit the stage dressed in colorful blue and yellow outfits before launching into their own unique movements. As entertaining as it was, I have to admit I was hoping for more. Perhaps they just needed more time, but I didn’t feel the story they were trying to tell.

10:50 p.m. – Jennifer loved the energy and adrenaline, but said it has to be raised to another level. Ne-Yo didn’t feel it was as competitive as it could have been. Derek wanted them to hit their routine harder, but loved their spirit. For their scores, Ne-Yo gave them 80, Jennifer 77 and Derek 79 for an average of 78.7. Not quite enough for the Silver Beats to move on, but hopefully they come back stronger next year.

10:55 p.m. – Last to perform is the contemporary dance group Royal Flux. Last season they were eliminated during the Duels and now they are back determined to win. During their final rehearsal, one of the dancers fractured her foot. Refusing to give up, she is planning to go through with the performance anyways. The routine kicks off with the crew rising up into a human pyramid and tossing the girl with a broken foot around. Luckily she’s not on the ground much! This crew specializes in intricate lifts and throws, but it wasn’t my favorite performance. My guess is they will move forward, but they need to step up their game moving forward.

10:59 p.m. – Derek complimented their athleticism. Ne-Yo drew attention the the men, who are so great at lifting and flipping the women around. Jennifer loved the emotion of their performance, but told them to “clean it up.” For their scores, Ne-Yo gave them 82, Derek 88 and Jennifer 91 for an average of 87. Royal Flux is moving to the Duels for the second year in a row! That’s a wrap for Week 5! Tonight’s highest score? Just an 87 from both Royal Flux and Madison Brown.

Prior to missing 'Dancing with the Stars' due to 'potential COVID exposure,' Derek Hough had canceled…

Derek Hough on 'Dancing with the Stars' having its first same-sex couple: 'I think it's going to be…