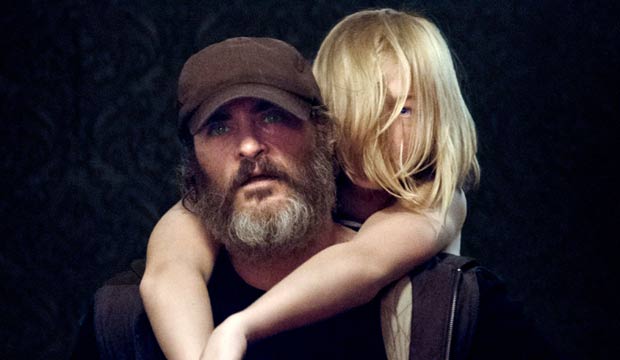 The unusual crime drama “You Were Never Really Here” opened on April 6 to mostly glowing reviews, with a score of 86 on MetaCritic and 87% freshness on Rotten Tomatoes. It had already made a strong impression almost a year earlier at the 2017 Cannes Film Festival, where writer-director Lynne Ramsay won Best Screenplay and star Joaquin Phoenix won Best Actor. Could Phoenix now be an early Oscar contender for his performance?

Phoenix plays a mysterious figure named Joe, a stoic hit man of sorts who is hired to rescue the daughter of a politician from a sex trafficking ring. But as the mission spins out of control he finds himself fighting for his own life. Joe is a man of few words, whose dialogue “would probably fit on an index card,” but many critics are praising him for “what might be the most rivetingly contained performance of his career.” He plays Joe with “disciplined doggedness,” showing us “the darkest depths of his soul.” The “gravity and force” of his performance are “impressive,” and Ramsay’s direction is “filmmaking of the purest, most inventive and energizing kind.”

Phoenix has been nominated for three Oscars thus far in his career. First he contended for his villainous supporting turn as Commodus in “Gladiator” (2000). Then he was up for Best Actor for taking on the biographical role of musician Johnny Cash in “Walk the Line” (2005). And most recently he received a Best Actor bid as a Navy veteran who becomes involved in a cult in “The Master” (2012). Do you think “You Were Never Really Here” will be remembered by the academy at year’s end? Check out some of the reviews below, and join the discussion on this and more with your fellow movie fans in our forums.

Justin Chang (Los Angeles Times): “The movie runs a sleek 89 minutes … and it feels as brutally stripped down as its anti-hero, a gloomy thug-for-hire named Joe, played by Joaquin Phoenix in what might be the most rivetingly contained performance of his career.”

Jessica Kiang (The Playlist): “‘You Were Never Really Here’ cannot be described as ‘arthouse goes genre’  because from Ramsay’s vantage point, so stratospherically far above the majority of mere mortal filmmakers, those distinctions don’t exist. There is just filmmaking of the purest, most inventive and energizing kind.”

A.O. Scott (New York Times): “Mr. Phoenix serves Ms. Ramsay’s vision with disciplined doggedness. His lines would probably fit on an index card, and none of them are especially memorable. But the sound of his breathing, his groans of frustration and his gasps of panic, his occasional squalls of weeping are hard to forget … The gravity and force of Mr. Phoenix’s performance and Ms. Ramsay’s direction are impressive.”

Emily Yoshida (Vulture): “It can’t be denied that Phoenix and Ramsay are more or less made for each other. Both are intense, capital-A artistic personas, allergic to half-measures, for better or worse … But it’s less surprising territory for Phoenix, who once again seems to be dredging up the darkest depths of his soul for us onscreen.”