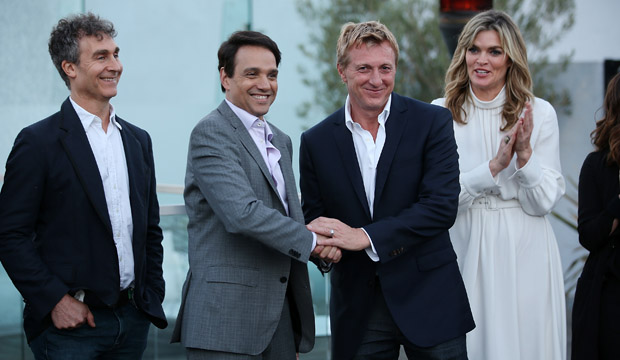 YouTube Originals entered the Emmy race with a recent mixer celebrating their new programs. Gold Derby was on-hand at the London Hotel penthouse in West Hollywood, CA, and snagged interviews with the talent behind “Cobra Kai” (Ralph Macchio and William Zabka), “Ryan Hansen Solves Crimes on Television” (Ryan Hansen), and “Impulse” (Maddie Hasson and Doug Liman). Scroll down and click on their names below to be taken to their full interviews.

With the TV landscape expanding every day, it’s not surprising that a video service like YouTube would compete at the Emmys alongside broadcast and cable. After all, Hulu made history last year by becoming the first streaming service to win Best Drama Series for “The Handmaid’s Tale.” And before that Netflix and Amazon made significant breakthroughs in nominations and wins.

So, how does YouTube Originals compete? Susanne Daniels, Global Head of Original Content for the company, told us, “The good news about these awards is that the voters tend to value great content over distribution service. The voters, I think, are just looking to reward good content, so it doesn’t matter where they watch it, especially in an on-demand universe where you can watch a show on the networks online as easily as you can watch a show on Netflix or YouTube online.”

Having great content is one thing, but getting that content on Emmy voters’ radar is the name of the game. “We’ve done mailers and links,” Daniels revealed, “and of course, several of our episodes of every single one of our series live in front of the paywall, so it’s very easy to access the first two-to-four episodes of every series we do; you can just see it on YouTube.”

Those shows include “Cobra Kai,” a TV sequel to the “Karate Kid” film franchise in which Johnny Lawrence (Zabka) reopens the Cobra Kai dojo, thus reigniting his rivalry with Daniel LaRusso (Macchio). They’ve also got “Ryan Hansen Solves Crimes on Television,” in which the title “Veronica Mars” actor is paired up with a no-nonsense police officer (Samira Wiley) to … well, solve crimes.

YouTube Originals also recently premiered “Impulse,” a re-imagining of Liman’s 2008 film “Jumper” that follows a young woman (Hasson) who discovers she has the ability to teleport. Liman directed the pilot and serves as an executive producer. All 10 episodes were made available on June 6, so they won’t be eligible for Emmys until next year’s awards, but it’s never too early to get a campaign off the ground.