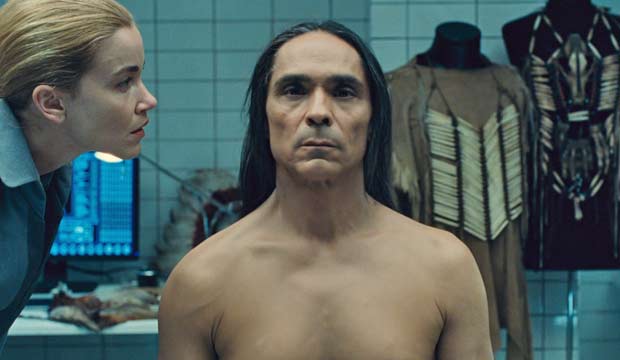 Zahn McClarnon suddenly became “Westworld’s” season two MVP in the span of an hour thanks to his role as Akecheta, leader of Ghost Nation in the eighth episode, “Kiksuya.” A nomination for Best Drama Supporting Actor would be a groundbreaking moment as the television academy has never nominated a Native American actor for a continuing series.

“Westworld” was nominated for Best Drama Supporting Actor last year for Jeffrey Wright, but he got a promotion this year to the lead category, which could open the door for McClarnon to make history: not only would he be the first Native American actor to receive a nomination for a series, he would also be only the second Native American actor ever nominated in any category, after August Schellenberg contended for Best Movie/Mini Supporting Actor for his performance as Sitting Bull in the HBO telefilm “Bury My Heart at Wounded Knee” in 2007.

A few Latin-American actors have won before. Ecuadorian-American actor Albert Paulsen won the catch-all Emmy for Best Supporting Actor for “Bob Hope Presents the Chrysler Theatre” in 1964. Then 26 years later Puerto Rican Jimmy Smits took home Best Drama Supporting Actor for “L.A. Law” in 1990. And fellow Puerto Rican Hector Elizondo claimed the prize in 1997 for “Chicago Hope.” No person of color has won in 21 years since then.

But the Emmys have made great strides in recognizing diverse actors. Last year Donald Glover (Best Comedy Actor, “Atlanta”), Sterling K. Brown (Best Drama actor, “This Is Us”) and Riz Ahmed (Best Movie/Mini Actor, “The Night Of”) each won their respective lead actor categories. That makes the limited diversity in Best Drama Supporting Actor all the more glaring.

With Wright promoted to lead and fellow 2017 nominee Ron Cephas Jones (“This is Us”) now competing as a guest, the Best Drama Supporting Actor category might not nominate any actors of color at all this year. McClarnon is currently an underdog with odds of 100/1, and there are no people of color at all among the top 15 contenders in our racetrack odds.

Vulture declared that McClarnon’s “Westworld” performance “is nothing short of incredible.” Entertainment Weekly described him as “great,” and Vox called him “revelatory.” If the acclaim isn’t enough he also has an Emmy IOU: he had a prominent role in season two of “Fargo,” but he was snubbed for Best Movie/Mini Supporting Actor in 2016. So will the television academy make it up to him?