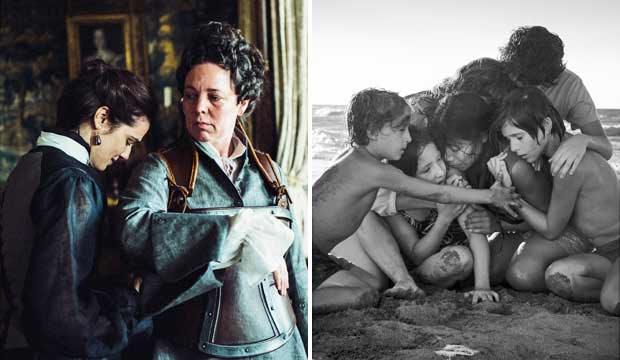 “The Favourite” heads into Sunday’s BAFTA Awards with a leading 12 nominations and we are predicting it will be the night’s big winner taking home seven awards, including both Best Picture and Best British Film. Do you agree? Scroll down to see our complete BAFTA predictions by film.

These predictions are based on the combined forecasts of industry experts, our in-house team of editors, the top 24 (those who did the best predicting last year’s BAFTAs), the all-stars (the most consistent scorers among our readers) and thousands of people just like you.

The Oscar frontrunner “Roma” is predicted to be the next biggest winner. It gets leading odds in three of its seven races: Best Director (Alfonso Cuaron), Best Cinematography and Best Foreign Language Film.

Only one other film is forecast to win multiple BAFTAs: “First Man” will go two for seven with victories for Best Film Editing and Best Sound.

“Bohemian Rhapsody” will bag only one prize from seven bids but it is a biggie: Best Actor for Rami Malek‘s portrayal of Queen frontman Freddie Mercury. Likewise for “Can You Ever Forgive Me?” which will go one for three with British veteran Richard E. Grant winning for his scene-stealing supporting performance. And Spike Lee will prevail for his adapted screenplay for five-time nominee “BlacKkKlansman”

Going home empty-handed will be “A Star is Born,” which is expected to lose all seven races including Best Score, which is tipped to go to “If Beale Street Could Talk.”

Do you agree with our picks? Check out our complete predictions by film below. And there’s still time to make or update your own predictions right here before prizes are handed out on February 10.

“Can You Ever Forgive Me?”
Best Supporting Actor: Richard E. Grant

Be sure to make your BAFTA predictions so that studio executives and top name stars can see how their films are faring in our odds. Don’t be afraid to jump in now since you can keep changing your predictions until just before winners are announced on February 10. And join in the fierce debate over the 2019 BAFTAs taking place right now with Hollywood insiders in our film forums. Read more Gold Derby entertainment news.