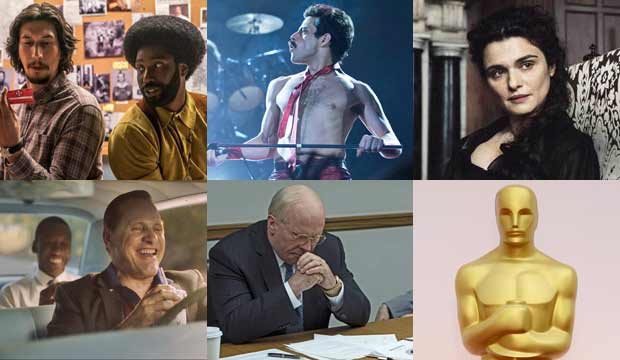 The American Cinema Editors guild, which hands out its awards on Feb. 1, has a good track record as a preview of the Oscar winner for Best Picture (17 out of the last 28) and a great one for forecasting who will win the Film Editing Oscar (21 of the last 28). And, not surprisingly, it is also fairly prescient when it comes to predicting the five Film Editing Oscar slots; all of this year’s Academy Awards nominees contend for this cutting prize.

In 1992, the Eddies went from three to five nominees (matching that of the Oscars) and in 2000 it split the award in two, with five nominees for each of drama and comedy/musical. Over the past 26 years, 115 of the 130 Oscar nominees for Film Editing had first reaped a Golden Eddie bid; that is an accuracy rate of 88%.

The film editors divide their awards for editing between dramas and comedies/musicals. Oscar nominees “BlacKkKlansman” and “Bohemian Rhapsody” contend here in the drama race, which is rounded out by frontrunner “First Man,” “Roma” and “A Star is Born.” Facing off against Oscar rivals “The Favourite,” “Green Book” and “Vice” on the comedy side are “Crazy Rich Asians”and “Deadpool 2.” We expect “Vice” to win here first before going on to collect the Oscar.

Last year, the film editors nominated at the Oscars were previewed by the ACE Eddie Awards. Lee Smith picked up the ACE award on the drama side for “Dunkirk” before collecting the Oscar. He bested “The Shape of Water” at both awards. At the guild honors, the drama race was rounded out by “Blade Runner 2049,” “Molly’s Game” and “The Post.” The other three Oscar nominees — “Baby Driver,” “I, Tonya,”  and “Three Billboards Outside Ebbing, Missouri” — vied for the comedy ACE Award, with “Get Out” and “Lady Bird” also in the running. It went to “I, Tonya.”

Likewise in 2017, all five of the Oscar nominees — “Arrival,” “Hacksaw Ridge,” “Hell or High Water,” “La La Land,”  and “Moonlight” — were first in contention at the ACE awards. John Gilbert won the Oscar for cutting “Hacksaw Ridge,” despite having lost the Golden Eddie to Joe Walker for his work on “Arrival.” Tom Cross had picked up the ACE award on the comedy/musical side for “La La Land.”

In 2016, two of the Oscar nominees for Best Film Editing — “Mad Max: Fury Road” and “The Big Short” — prevailed here first, winning the drama and comedy Eddie awards. Eventual Oscar champ “Mad Max: Fury Road” edged out two Oscar rivals — “The Revenant” and “Star Wars: The Force Awakens” — as well as “The Martian” and “Sicario.” “The Big Short” prevailed over “Ant-Man,” “Joy,” “Me and Earl and the Dying Girl” and “Trainwreck.” The fifth Oscar nominee — “Spotlight” — was snubbed by the guild.

In 2015, all five Oscar nominees first reaped Eddie bids: eventual Oscar champ “Whiplash” as well as ACE champs “Boyhood” and “Grand Budapest,” plus “American Sniper” and “The Imitation Game.”  In 2014 four of the Eddie nominees made the cut at the Oscars (“Dallas Buyers Club” got the fifth slot).

In both 2012 and in 2013 five of the Eddie nominees comprised the Oscar slate. In 2011, four Eddie nominees contended at the Oscars (“127 Hours” got the fifth slot) while in 2010, only three of five ACE drama nominees — “Avatar,” “District 9” and “The Hurt Locker” — reaped Oscar bids with “Inglorious Basterds” and “Precious” added to the mix.