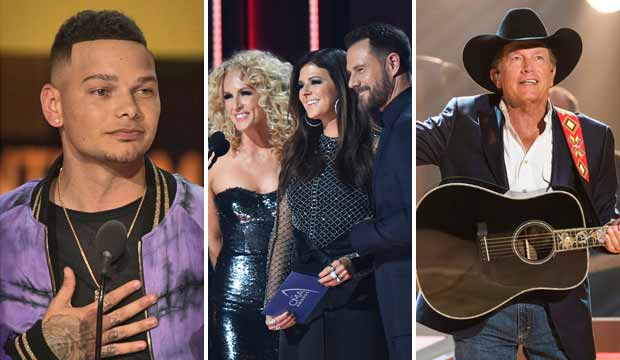 The 2019 Academy of Country Music Awards recently announced that Jason Aldean will be performing during the awards telecast on April 7 in addition to receiving the Artist of the Decade prize. Now the ACMs have revealed a full first round of stars who will also take the stage: Brothers Osborne, Kane Brown, Miranda Lambert, Little Big Town, Reba McEntire, Maren Morris, Thomas Rhett, Chris Stapleton and George Strait.

McEntire won’t just be on stage as a performer. She’ll also be hosting the awards for the 16th time. And that also happens to be the number of ACM Awards she has won in her career, including honorary prizes like the Humanitarian Award (2002) and the 50th Anniversary Milestone Award (2015). But she doesn’t have any nominations this year.

Stapleton, meanwhile, is one of this year’s biggest contenders, nominated six times including Entertainer of the Year and Album of the Year (as both artist and producer of “From A Room: Volume 2”). He’s also the reigning champ for Male Artist of the Year.

Lambert is the nine-time reigning champ for Female Artist of the Year. She’s now aiming for a clean sweep of the decade with her 10th victory, which would extend her record for the most victories in that category’s history. In addition to that, she’s also up for Musical Event of the Year for “Drowns the Whiskey” with Aldean.

Brothers Osborne have won Duo of the Year for the last two years, and they’re hoping to three-peat in addition to three other nominations: Music Video of the Year (“Burning Man” with Dierks Bentley and “Shoot Me Straight” on their own) and Musical Event of the Year (also for “Burning Man”).

Who are you looking forward to seeing the most when the awards are handed out at the MGM Grand Garden Arena in Las Vegas, Nevada?