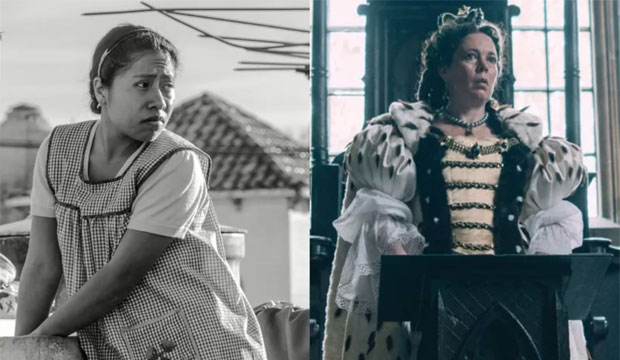 The 2019 Critics’ Choice Awards were held on January 13 but viewers could be confused and think that they were watching a repeat of last Sunday’s Golden Globes as there were so many repeat winners. The 350 plus members of the Broadcast Film Critics Assn., which doles out these awards, pride themselves on offering the best predictions of what will happen at the Oscars. So who’s up, who’s down, and who’s out of the race for the Academy Awards.

“Roma”
As predicted, Alfonso Cuaron collected four prizes for his personal memoir: Best Director, Cinematography, and as a producer of both the Best Picture and Best Foreign Language Film. He only lost his bid for Best Film Editing (to Tom Cross who cut “First Man”). This is great news on the eve of Oscar nominations voting closing. However, it’s important to note that Critics’ Choice has an uneven track record predicting the Best Picture winner. Only 14 of the 23 previous winners have gone on to claim the top Oscar (61%).

“A Star is Born”
Bradley Cooper’s remake of the Hollywood classic was all but shut out at the Golden Globes, winning just Best Original Song. So it was a shot in the arm when Lady Gaga won that award here at the start of the evening and then ended it with another win as tied for Best Actress with Glenn Close (“The Wife”) who had edged her out at the Globes. These two wins for Lady Gaga came just days after Cooper also earned two nominations from the Directors Guild.

“If Beale Street Could Talk”
After being snubbed at the BAFTAs, Globes champ Regina King rallied and won for her acclaimed supporting turn. She has dominated the regional critics’ prizes up to this point, so this group was well-suited to her. And director Barry Jenkins pulled off an upset in the competitive adapted screenplay race.

“The Favourite”
The film is driven by both its performances and its visuals, a combination that led to a whopping 14 nominations at these awards. That far outpaced the showings of Oscar rivals “A Star is Born” (9 nominations), “Roma” (8) and “Green Book.” However, it was shut out of the marquee races and limited to just two wins: Best Ensemble, Best Comedy Actress (Olivia Colman).

“First Man”
“First Man” lost eight of its 10 races; it took home Best Film Editing and Best Score (Golden Globes champ Justin Hurwitz repeated and is looking like the film’s best shot at the Oscars.) This came just days after it appeared to have rallied by reaping seven BAFTA nominations. But Damien Chazelle was snubbed by the DGA and the film does not number among the 10 nominees for Best Picture at the PGA Awards.

“Green Book”
Given its strong showing at the Globes, where it won Best Comedy/Musical as well as the combined screenplay race and the supporting actor award (Mahershala Ali), it was a shock to see it leave here with just a repeat win for Ali. It had reaped a now unlucky seven nominations despite being snubbed in the Best Comedy category.

“Mary Poppins Returns”
This long-awaited sequel failed to impress BFCA voters when it came to casting their ballots for the winners. While it earned an eye-popping nine nominations, it lost all of its races. On the heels of being all but shut out of the BAFTA nominations (it reaped just three), signs are not looking good for this long-awaited sequel.

“Vice”
While Adam McKay‘s political satire came into the evening with nine nominations, it was kept to  just three wins with Christian Bale claiming both Best Actor and Best Comedy Actor and the make-up & hairstyling team taking home a prize. This comes on the heels of a good news/bad news week: McKay reaped a DGA bid but his film was not among the five nominated for Best Picture at the BAFTAs.

Be sure to make your Oscar nomination predictions so that Hollywood studio executives and top name stars can see how their films are faring in our Academy Awards odds. Don’t be afraid to jump in now since you can keep changing your predictions until just before nominees are announced on January 22. And join in the fierce debate over the 2018 Oscars taking place right now with Hollywood insiders in our film forums. Read more Gold Derby entertainment news.