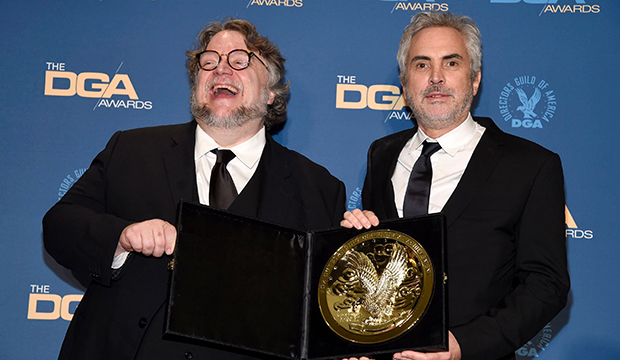 Winners for the 71st Directors Guild of America Awards will be unveiled Saturday, Feb. 2, at 10:30 p.m. ET / 7:30 p.m. PT in a non-televised ceremony hosted by Aisha Tyler at the Hollywood and Highland Center in Los Angeles. Follow along below with our live blog as we’ll be updating with all the winners as they happen.

During the ceremony, per tradition, all five feature film nominees — Bradley Cooper (“A Star Is Born”), Alfonso Cuaron (“Roma”), Peter Farrelly (“Green Book”), Spike Lee (“BlacKkKlansman”) and Adam McKay (“Vice”) — will be presented with nomination medallions by stars of their films before the winner is revealed in the final award of the night. Three of these five reaped Best Director Oscar nominations, with Cooper and Farrelly missing for Yorgos Lanthimos (“The Favourite”) and Pawel Pawlikowski (“Cold War”).

Honorary awards will be given to the following:

The order of presentation is:

8:08 p.m. — Tony Hale presents Children’s Programs to Jack Jameson for “When You Wish Upon a Pickle: A Sesame Street Special.” “A Series of Unfortunate Events” had three nominations here. Vote-splitting? Believe it or not, this is “Sesame Street”‘s first win in the category.

8:13 p.m. — Time for the first feature film nominee tribute of the evening. “Roma” stars and Oscar nominees Yalitza Aparicio and Marina de Tavira, who have the best ground game this season, are here to present the nomination medallion to Alfonso Cuaron.

8:23 p.m. — Constance Wu presents Variety/Talk/News/Sports — Series to Don Roy King for “Saturday Night Live”(Episode: “Host: Adam Driver/Musical Guest: Kanye West”). This is King’s third straight win and fourth overall in the category, all for “SNL.” “SNL” and “The Tonight Show Starring Jimmy Fallon” are the only winners in this category since it was established five years ago.

8:28 p.m. — Wu presents Varity/Talk/News/Sports — Specials to Louis J. Horvitz for the 60th Grammy Awards. This was his 19th nomination and third in this category since the variety award was split into series and specials five years ago.

8:43 p.m. — Mother Nature (aka rain) has prevented Sam Elliott from attending, so Bradley Cooper’s “Hangover” director Todd Phillips is presenting the nomination medallion to him instead. (In case you’re wondering, Lady Gaga has an “Enigma” performance in Las Vegas.)

8:53 p.m. — Brian Tyree Henry presents Reality Programs to Russell Norman for “The Final Table” (Episode: “Japan”). This is the third cooking show to win after “The Next Iron Chef” and “MasterChef.”

9:00 p.m. — Our favorite spies Keri Russell and Matthew Rhys present Comedy Series to Bill Hader for the “Barry” pilot “Chapter One: Make Your Mark.” There were two “Atlanta” and two “The Marvelous Mrs. Maisel” episodes in there. Double vote-split? “Barry”‘s win makes it four straight victories for HBO in this category; “Veep” prevailed the last three years.

9:03 p.m. — Former DGA President Paris Barclay presents the Diversity Award to FX. This is only the sixth time it’s being given out. The network worked to change its poor record of hiring female and people of color directors following a 2015 report by former Variety TV critic Maureen Ryan. Ryan Murphy‘s Half Initiative, which commits half of his shows’ directing slots to women, contributed to FX’s improved record.

9:19 p.m. — Christian Bale, who’s giving the most off-the-cuff speeches this season, does the tribute honors for his “Vice” director Adam McKay.

10:04 p.m. — Dolores Huertas presents Documentary to Tim Wardle for “Three Identical Strangers.” This and “Won’t You Be My Neighbor?” were snubbed by the Oscars.

10:06 p.m. — “BlacKkKlansman” stars John David Washington, Laura Harrier and Topher Grace are out to sing the praises of Spike Lee.

10:20 p.m. — Sarah Paulson presents Movies for Television and Limited Series to Ben Stiller for “Escape at Dannemora,” which is completely crushing “Sharp Objects” this season. If it weren’t for “The Assassination of Gianni Versace: American Crime Story,” “Dannemora” probably would’ve taken the limited series prizes at the Golden Globes, Critics’ Choice and Producers Guild of America Awards too. Luckily for it, “Versace” competed in last year’s Emmy cycle.

11:02 p.m. — And reigning champ Guillermo del Toro presents the Feature Film prize to his pal Afonso Cuaron for “Roma.” Cuaron is now the 13th person to win this award twice, following his triumph for “Gravity” (2013). (Steven Spielberg holds the record with three wins.) DGA and Oscar have disagreed seven times in 70 years, so he’s locked and loaded, as if he weren’t already.