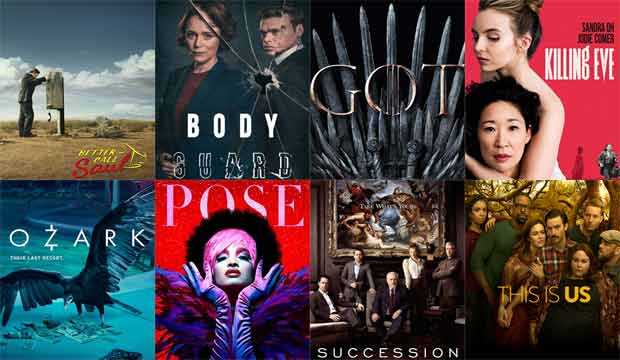 We’re inching closer and closer to the 71st Primetime Emmy Awards, which are scheduled for Sunday, September 22 on Fox. For the first time in 16 years, there is no host for the TV academy’s annual awards ceremony. However, there are plenty of A-list presenters. Trophies will be handed out in 27 categories including dramas, comedies, limited series/movies, variety and reality. Below, we lay out exclusive 2019 Emmy racetrack odds for the seven drama races, with predicted winners in gold.

SEE Emmy predictions slugfest: Is ‘Game of Thrones’ a done deal, or is there room for ‘Succession’ shocker? [WATCH]

Gold Derby’s racetrack odds are calculated by combining the predictions of thousands of Gold Derby users who have been forecasting these awards since the nominations were announced in July. That includes more than 30 Expert journalists we’ve polled from top media outlets, our staff Editors who cover awards year-round, the Top 24 Users who got the highest scores predicting last year’s Emmy winners, the All-Star Users who got the highest scores when you combine the last two years’ Emmy predictions, and everyday Users who make up our largest predictions bloc by far.

“Game of Thrones” (HBO) leads all TV programs this year with a record-breaking 32 Emmy nominations, though most of those were handed out last week during the Creative Arts ceremonies. Next up with 11 bids is “The Handmaid’s Tale” (Hulu) for its three orphaned episodes that aired last summer; note that the show itself is not eligible for consideration as a series or for its regular cast members.

No other drama series received double-digit nominations this year, though “Better Call Saul” (AMC), “Killing Eve” (BBC America), “Ozark” (Netflix) and “This Is Us” (NBC) all came close with nine bids apiece. “Pose” (FX) is next with six noms, followed by “Succession” (NBC) with five, “House of Cards” (Netflix) with three, “How to Get Away with Murder” (ABC) with three and “Bodyguard” (Netflix) with two.

SEEEmmy episode analysis: Billy Porter (‘Pose’) sings his heart out as a grieving man in ‘Love Is the Message’

SEE Emmy episode analysis: Peter Dinklage (‘Game of Thrones’) trades in a mad queen for a new king in ‘The Iron Throne’