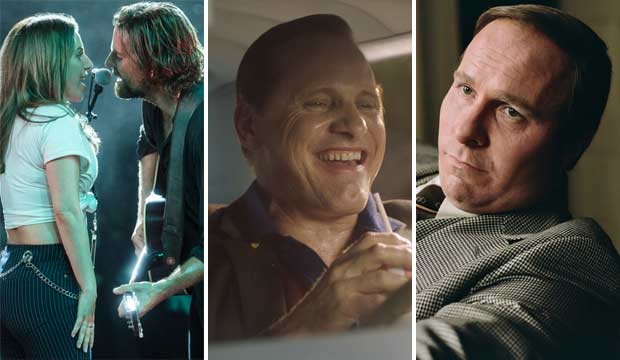 The 76th Golden Globes Awards will be handed out this Sunday. Nearly 2,700 Gold Derby Experts, Editors and Users have made their collective predictions in 14 film categories. If any pick seems to be a no-brainer, it is that the 90 some members of the Hollywood Foreign Press Association will reward the hit song “Shallow” from “A Star Is Born,” co-written by its leading lady, Lady Gaga. Another fairly certain win? “Roma,” the Spanish-language Netflix release for Best Foreign Language Film since only movies in English qualify to compete for Best Drama.

But let’s look at three key races where there may be some wiggle room for some reconsideration:

Best Director: Will Bradley Cooper bump Alfonso Cuaron?
Cooper has been atop the Best Actor list since the Globe ballot was announced in early December. But late last week, there was a surge of support for Rami Malek to win Best Film Drama Actor for his transformation into Freddie Mercury in “Bohemian Rhapsody.” Since his performance is the only chance to honor the worldwide blockbuster biopic, it is unlikely Cooper has a chance to beat him.

But the actor could knock “Roma’s” Cuaron off his No. 1 directing perch. The Globe voters are quite fond of actor-directors, starting with rewarding Paul Newman for his 1968 directing debut, “Rachel, Rachel,” and Cooper’s own debut behind the camera is certainly worthy of gold. After all, these are the folks that didn’t just nominate Ben Affleck as Best Director for 2012 “Argo” when the Oscar voters snubbed him. They gave a trophy to him as well as to his drama. Also, only two directors have won a Globe for a foreign language movie, Ang Lee for 2000’s “Crouching Tiger, Hidden Dragon” and Julian Schnabel for  2007’s “The Diving Bell and the Butterfly.”

Best Comedy/Musical Actor: Can Viggo Mortensen run over Christian Bale?
“Vice” topped all films in number of Globe nominations with six. Obviously, the divisive political dramedy has its fans among the Gold-sters. And Bale has not budged from being No. 1 among comedy actors for his uncanny personification of Vice President Dick Cheney. But, odds-wise, both he and Mortensen — who gained even more weight than the famously shape-shifting Bale as an Italian bouncer turned chauffeur in “Green Book” –are right now tied with 17/5 odds. The onetime Batman, who won a Globe for his supporting role in 2011’s “The Fighter,”  is not quite as overdue to win a lead as Mortensen, a four-time Globe nominee who has yet to take home a statue. Plus, “The Lord of the Rings” king took a even bigger stretch by starring in a rare comedy for a change.

Best Comedy/Musical Picture: Will “Green Book” bypass a royal roadblock from “The Favourite”?
Those royal schemers in Yorgos Lanthimos‘ art-house sleeper have been threatening the reign of “Green Book”  in the musical or comedy film category since Christmas Day. The road-trip buddy movie has gained a little breathing room since then and Lanthimos was left out of the director category while “Book’s” Peter Farrelly pulled into a spot. But it wouldn’t be a complete surprise if the unholy trinity of Olivia Colman, Emma Stone and Rachel Weisz somehow finds a way to flatten “Green Book” and snatches away the Globe.

What do you think? Are we overestimating or underestimating a film or performer’s chances in certain categories? Share your opinions in the comment area below.