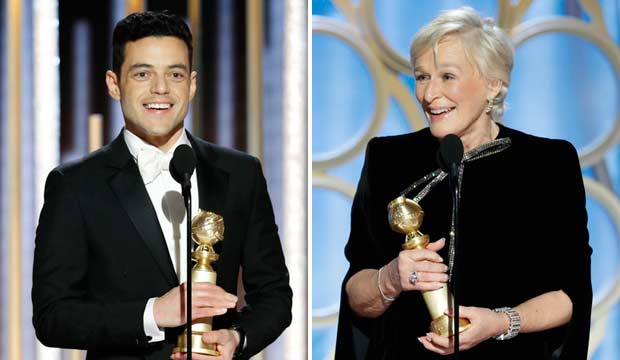 You can usually count on the Golden Globes to deliver plenty of upsets. But which ones took us the most by surprise? Below were the biggest shockers that the Hollywood Foreign Press Association gave us this year in the film categories. The full list of winners can be found here.

Jaws were on the floor when “Bohemian Rhapsody” was named Best Film Drama at the conclusion of Sunday’s ceremony. The Freddie Mercury biopic was ranked dead last in our combined odds with a 9/2 chance of winning. “A Star is Born” was the heavy favorite to win with 31/10 odds followed by “BlacKkKlansman” (4/1), “Black Panther” (9/2) and “If Beale Street Could Talk” (9/2). Yowza!

Glenn Close delivered another of the most gasp-worthy moments of the night when she took home Best Film Drama Actress for “The Wife” despite second-place odds of 19/5. It seemed like practically a forgone conclusion that Lady Gaga (“A Star is  Born”) would take home the prize with leading odds of 31/10. Close defied expectations, and after her name was called she gave an emotional, heartfelt speech that elicited a standing ovation — and then another one mid-speech. Is the Oscar next?

Elsewhere, Justin Hurwitz proved he should never be counted out at the Golden Globes. The composer won Best Score for his work on “First Man,” earning his third Globe win and remaining undefeated at these kudos (he previously won Best Song and Best Score for “La La Land”) even though we gave him second-place odds of 19/5. Marc Shaiman was expected to win for his compositions in “Mary Poppins Returns” (69/20).

Lastly, “Green Book” was favored to win Best Film Comedy/Musical (and did), but it also earned surprise honors for its screenplay. Nick Vallelonga, Brian Currie and Peter Farrelly took home the Globe after we ranked them second with 39/10 odds. Deborah Davis and Tony McNamara were favored to win for “The Favourite” with 82/25 odds. Were you as surprised as we were by the night’s unexpected outcomes?