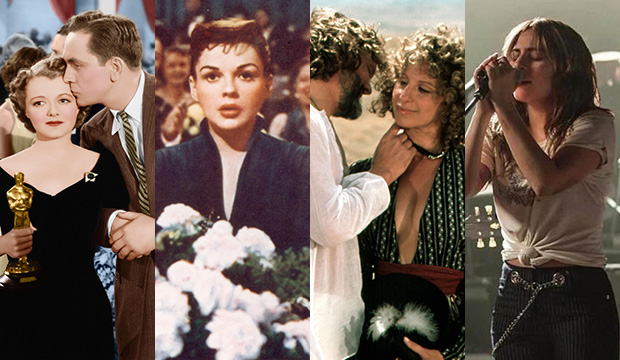 “A Star Is Born” reaped eight Oscar nominations on Tuesday, three fewer than our predicted 11 after some snubs, like Best Director. But despite those omissions, there’s a lot for Ally to sing about because it’s still the most nominated version of “A Star Is Born” ever in Oscar history, edging out the original by one bid.

Here’s how all four versions of “A Star Is Born” have done with the academy:

SEE Oscar nominations: Who’s up (‘Vice,’ ‘The Favourite’), who’s down (‘Green Book, ‘A Star Is Born’) in the Best Picture race?

If you’re too lazy to count, the “A Star Is Born” quartet has notched 25 nominations and two wins, not counting the honorary award. The categories haven’t been very consistent though. The 2018 remake is just the second one to make Best Picture after the 1937 film, but it missed director for Cooper, so the original remains the only to snag a directing bid. Barbra Streisand‘s 1976 rock musical is the only one without any above-the-line nominations, specifically acting ones for the two leads. Cooper’s version is the first to have three actors shortlisted, with Sam Elliott grabbing a spot in Best Supporting Actor. The 1954 film is the only one thus far to go home empty-handed. Its widely expected win, of course, was in Best Actress for Garland, who was upset by Grace Kelly (“The Country Girl”).

It’s unlikely the 2018 version will get goose-egged as well since “Shallow” is one of mortal locks of the season. But can it be the first version of “A Star Is Born” to win more than Oscar? It’s suffered quite a few blows in the past few weeks, coming up short of the big prize at the Golden Globes, Critics’ Choice Awards and Producers Guild of America Awards, while Cooper has lost ground in Best Actor to comedy/musical Globe and Critics’ Choice winner Christian Bale (“Vice”) and drama Globe champ Rami Malek (“Bohemian Rhapsody”), and Glenn Close (“The Wife”) upset her eventual Critics’ Choice co-winner Gaga at the Globes. And obviously the Best Director snub is not great.

But at least it’s far from the shallow in the “A Star Is Born” cinematic universe when it comes to nominations.