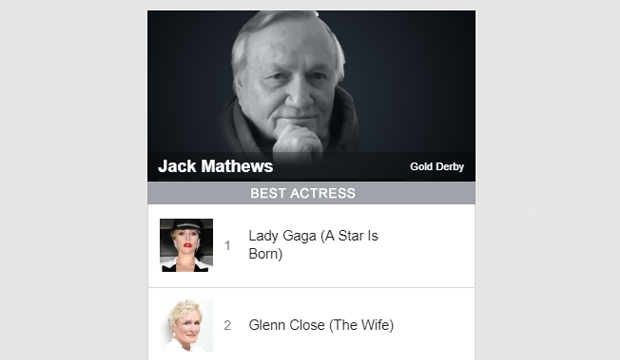 The strangeness of this Oscar season is that predicting nominees seems easier than ever while identifying the actual front-runners is a bitch.

Even before “Green Book” won the Producers Guild award on Saturday and changed the dynamics of the Best Picture race, it looked like a “pick-em” between “Roma” and “A Star is Born” for the Oscar with “BlacKkKlansman,” “The Favourite,” “Green Book” and even Globe drama winner “Bohemian Rhapsody” charging from behind.

Expect all of those movies to be on the Oscars Best Picture ballot to be announced before sun-up on Tuesday (Jan. 22) and any of them could win at next month’s Academy Awards.

It’s the same in the acting categories. There are no prohibitive favorites like Gary Oldman (“The Darkest Hour”), Meryl Streep (“The Iron Lady”) or Matthew McConaughey (“Dallas Buyer’s Club”) to check off with confidence. Yet, the picture is pretty clear who at least four of the nominees will be in each of the acting categories.

Best Actor
Christian Bale (“Vice”), Bradley Cooper (“A Star is Born”), Viggo Mortensen (“Green Book”) and Rami Malek (“Bohemian Rhapsody”) are locks to be in, and either John David Washington (“BlackKlansman”) or Ethan Hawke (“First Reformed”) will be among them. Critics would probably choose Hawke, but academy voters aren’t critics, so I’m going with Washington from the more mainstream movie.

Best Actress
Lady Gaga (“A Star is Born”), Glenn Close (“The Wife”), Olivia Colman (“The Favourite”), and Melissa McCarthy (“Can You Ever Forgive Me?”) will be in, and either Emily Blunt (“Mary Poppins Returns”) or Yalitza Aparicio (“Roma”) will join them. Conventional wisdom favors Blunt who has received SAG, Globe, BAFTA and Critics Choice nominations while the more deserving Aparicio has only made the Critics Choice ballot.

Supporting Actor
Mahershala Ali (“Green Book”), Timothee Chalamet  (“Beautiful Boy”), Richard E. Grant (“Can You Ever Forgive Me?”), Adam Driver (“BlackKlansman”) will be in and joined by either Sam Elliott (“A Star is Born”), if there’s any justice, or Sam Rockwell (“Vice”) if there’s not.  Elliott gives the performance of his career while Rockwell does a Saturday Night Live cameo impersonation of George Bush.

Your best longshots: Jonathan Pryce, the equal of Glenn Close in “The Wife,” Michael B. Jordan (“Black Panther:”).

Supporting Actress
In will be Amy Adams (“Vice”), Rachel Weisz and Emma Stone from “The Favourite,” and Regina King (“If Beale Street Could Talk”) who, despite being snubbed by SAG and BAFTA, is now the one to beat. That fifth spot figures to go to either Claire Foy (“First Man”) or Emily Blunt (“A Quiet Place”). The actors would do their integrity some good by putting Blunt here and Aparicio on the best actress ballot

What surprises do you think that there will be? Make your Oscar predictions today so that Hollywood insiders can see how their films and performers are faring in our odds. You can keep changing your predictions as often as you like until nominations are announced on January 22. And join in the debate taking place right now with Hollywood insiders in our film forum.