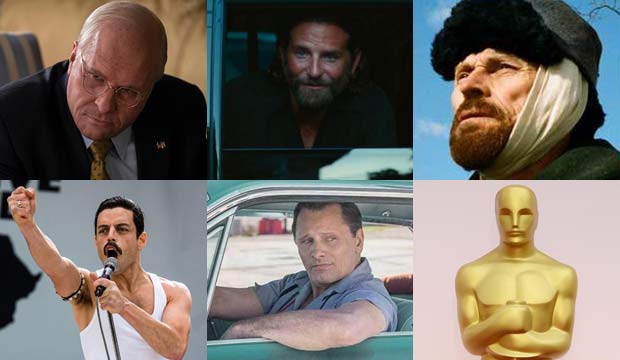 With his win at the SAG Awards, Rami Malek picked up enough support from our experts to move past Christian Bale on our Best Actor chart. Malek now has the votes of eight experts while Bale has the backing of six. One-time frontrunner Bradley Cooper (“A Star is Born”) is hanging onto the support of two of our Oscarologists.

So far this awards season, Bale has collected a Golden Globe and two Critics’ Choice Awards for his performance as Dick Cheney in “Vice.” Malek also won with the Hollywood Foreign Press Assn., picking up the prize on the drama side in a shocking upset over Cooper. Indeed, Cooper has yet to win any hardware for his performance as a star in decline.

Bale and Malek both portray real-life people, which has proven to be a winning formula for 11 of the leading men who’ve taken home the Best Actor Oscar this century. The reigning champ is Gary Oldman who was transformed by makeup wizards into Winston Churchill in “Darkest Hour.”

Both Bale and Malek subsume themselves into their roles. The British Bale plays American politico Dick Cheney while American-born Malek is the English rock star Freddie Mercury. Take a look at the predictions of our experts and then make your own in this race and the other 23 categories at the 91st Academy Awards.

Be sure to make your Oscar predictions so that Hollywood insiders can see how their films and performers are faring in our odds. You can keep changing your predictions until just before winners are announced on February 24. And join in the fierce debate over the 2018 Oscars taking place right now with Hollywood insiders in our movie forums. Read more Gold Derby entertainment news.

Don't underestimate Christian Bale: 'Ford v Ferrari' would be his 5th Oscar nomination for a…

Christian Bale, Tom Hanks and Jamie Foxx are looking to be the first man to win both individual film SAG…

Will Golden Globes and SAG Awards make it up to Rami Malek? He never won for 'Mr. Robot'

Rami Malek flashback: He thanks 'Mr. Robot' fans for their 'undying love and support' as final season…