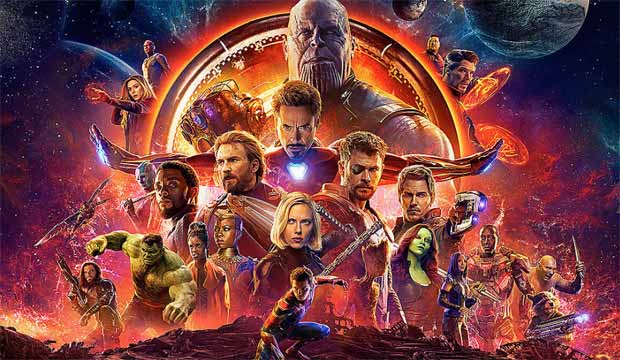 Now that comic actor Kevin Hart has adamantly just said no to overseeing the Oscars ceremony that will air on ABC on February 24 after being called out for past homophobic tweets, the Academy of Motion Picture Arts and Sciences is recruiting presenters from the Marvel Comic Universe to bring some mainstream muscle to the show. Since Disney owns both Marvel and ABC, it makes sense that it would summon the blockbuster might of its most popular franchises. After last year’s record low ratings for the annual parade of glitz and glamour, the three-hour-plus production could use some pow.

Since then, spinoffs and sequels, including likely nominee “Black Panther,” has have caused a comic-book big-screen boom in such do-gooders, including last year’s “Avengers: Infinity War,” the top-grossing movie worldwide last year. The irony is that no live-action superhero adventure has found a spot in the Best Picture line-up in 90 years, but “Panther” is seen to have the best shot since 2008’s “The Dark Knight” to make the cut.

In addition, it seems that, for the first time since 1990, the telecast is destined to go hostless. That year infamously featured actor Rob Lowe and an unknown singer dressed as Snow White singing and dancing to a version of “Proud Mary” with Oscar-related lyrics. Not since “Springtime for Hitler” has a musical number caused such shock and awe from an audience. After much outcry, the academy recruited Billy Crystal as host the next year for his first of nine stints.

SEEWhy did the Oscars go back to hosts after 1990? Blame Snow White!

The Academy Awards went without a host previously without much incident three years in a row, 1969, 1970 and 1971.  After it all, it was the era of the counter-culture and 19-time emcee Bob Hope was deemed to be “a bore” by the show’s producer, Gower Champion, in ’69. Instead, he recruited 10 Hollywood notables  — dubbed “The Friends of Oscar” — including Ingrid Bergman, Sidney Poitier and Jane Fonda.

In 1970, “The Friends of Oscar” grew to 16, including Myrna Loy, Elliott Gould and Cliff Robertson. As for the 1971 ceremony, Oscar’s pals ballooned to 33, including everyone from Lola Falana to Melvyn Douglas. Hope came back in 1975 as a co-host and went solo one last time in 1978.

This could be the best innovation ever or it could turn out to be one long commercial for Disney tie-ins. I just want to know one thing: Will the Marvel mob be in costume?