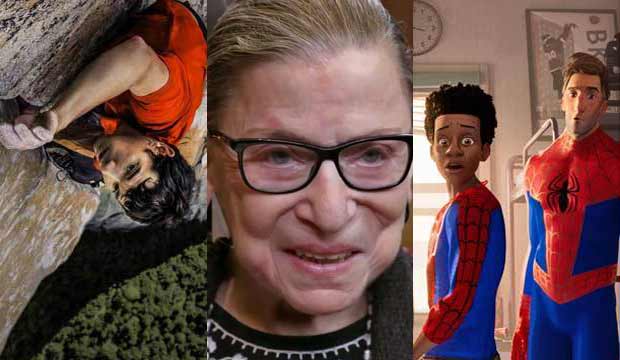 Gold Derby has conducted exclusive video interviews with 10 Oscar nominees for Best Animated Feature, Best Documentary Feature, and Best Foreign Language Film. How will they do when the winners are announced on Sunday, February 24? Follow the links below to be taken to their full interviews.

Brad Bird (Best Animated Feature, “Incredibles 2”): After winning this category at the Oscars for “The Incredibles” (2004) and “Ratatouille” (2007) Bird has returned to the race with this sequel to his animated superhero classic. The film also earned Best Animated Feature nominations at the Golden Globe, BAFTA, PGA and Critics’ Choice Awards. Bird also received Oscar noms for writing the original “Incredibles” and “Ratatouille,” though not for “Incredibles 2.” (Click here to be taken to his full interview)

Jimmy Chin (Best Documentary Feature, “Free Solo”): Chin earned his first Oscar nomination for this documentary about a death-defying mountain climb. The film won the BAFTA Award and also contended at the DGA and PGA Awards. (Click here to be taken to his full interview)

Jeremy Dawson (Best Animated Feature, “Isle of Dogs”): Dawson is back in the Oscar race for producing Wes Anderson‘s animated feature about an island filled with canines. He previously competed for Best Picture for Anderson’s “The Grand Budapest Hotel” (2014). In addition to its Oscar nom, “Isle of Dogs” was also up for BAFTA, Golden Globe, Critics’ Choice and PGA Awards. (Click here to be taken to his full interview)

Florian Henckel von Donnersmark (Best Foreign Language Film, “Never Look Away”): After his film “The Lives of Others” (2006) won this category 12 years ago Henckel von Donnersmark has returned with an epic character study about a German painter during WWII. The film also competed at the Golden Globes. (Click here to be taken to his full interview)

Nadine Labaki (Best Foreign Language Film, “Capernaum”): This drama about a young boy living in poverty in Lebanon is Labaki’s first Oscar-nominated film. It also competed at the Golden Globes, BAFTAs, and Critics’ Choice Awards. (Click here to be taken to their full interview)

Bing Liu (Best Documentary Feature, “Minding the Gap”): Liu received his first Oscar bid for this intimate documentary about a group of skateboarding friends living in the Rust Belt. The film also competes at the Independent Spirit Awards. (Click here to be taken to his full interview)

Peter Ramsay, Robert Rothman (Best Animated Feature, “Spider-Man: Into the Spider-Verse”): Ramsay and Rothman both received their first Oscar nomination for this animated superhero adventure about a teenager who becomes Spider-Man, only to find out he’s not the only one. The film has swept the precursors, winning at the Golden Globes, BAFTAs, Critics’ Choice Awards, and PGA Awards. (Click here to be taken to their full interview)