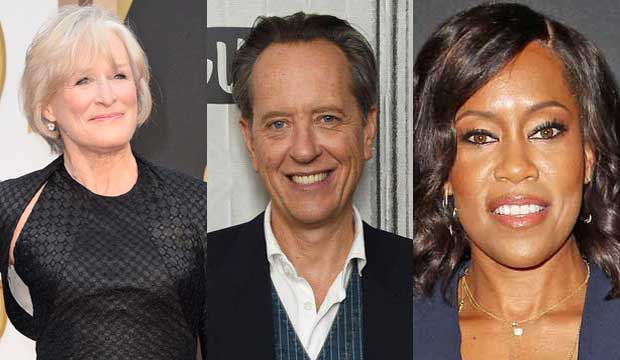 Over the past few months we’ve hosted exclusive video interviews with eight of this year’s Oscar nominees for acting. Will they get the almighty Gold Derby bump when the envelopes are opened on Sunday, February 24? Follow the links below to be taken to their full interviews.

Yalitza Aparicio (“Roma”): Aparicio pulled off the rare feat of earning an Oscar nomination for her acting debut. She competes in Best Actress for playing Cleo, a maid working for an upper-middle class family in Mexico City during the 1970s. She also contended at the Critics’ Choice Awards. (Click here to be taken to her full interview)

Glenn Close (“The Wife”): After victories at the Golden Globe, SAG, and Critics’ Choice Awards, Close may finally win her long overdue Best Actress Oscar on her seventh try. “The Wife” casts her as the spouse of an arrogant writer (Jonathan Pryce); she begins to question her life choices when they travel to Stockholm where he is being honored with a Nobel Prize. (Click here to be taken to her full interview)

Marina de Tavira (“Roma”): Despite being overlooked by all precursor awards, de Tavira surprised everyone with her Best Supporting Actress nomination for Alfonso Cuaron‘s intimate drama. She plays Sofia, the matriarch of the aforementioned family in Mexico City who becomes increasingly reliant on her housekeeper (Aparicio) when her husband leaves. (Click here to be taken to her full interview)

Willem Dafoe (“At Eternity’s Gate”): After three nominations in the supporting category, Dafoe earned his first Best Actor bid for Julian Schnabel‘s biographical drama about painter Vincent Van Gogh. He also competed at the Golden Globes and Critics’ Choice Awards and won the lead acting prize at the Venice Film Festival. (Click here to be taken to his full interview)

SEE Which guild points the way to the Best Picture winner at the Oscars?

Sam Elliott (“A Star Is Born”): After 50 years in the business, Elliott finally joined the awards race with a Best Supporting Actor nomination for Bradley Cooper‘s musical drama. He plays Bobby, the manager and older brother of a drunken rock star (Cooper). He also contended at the SAG and Critics’ Choice Awards for the role. (Click here to be taken to his full interview)

Richard E. Grant (“Can You Ever Forgive Me?”): This biographical drama brought Grant his first Oscar nomination as Best Supporting Actor, as well as bids at the Golden Globe, SAG, BAFTA, and Critics’ Choice Awards. He plays Jack Hock, a carefree grifter who teams up with misanthropic author Lee Israel (Melissa McCarthy) to sell literary forgeries to collectors at high prices. (Click here to be taken to his full interview)

Regina King (“If Beale Street Could Talk”): King has already won prizes at the Golden Globes and Critics’ Choice Awards as Best Supporting Actress for Barry Jenkins‘s acclaimed James Baldwin adaptation. “If Beale Street Could Talk” centers on Tish (Kiki Lane), who desperately tries to free her lover (Stephan James) from prison when he’s falsely accused of rape. Her mother, Sharon (King), is just as determined to clear his name as she is. (Click here to be taken to her full interview)