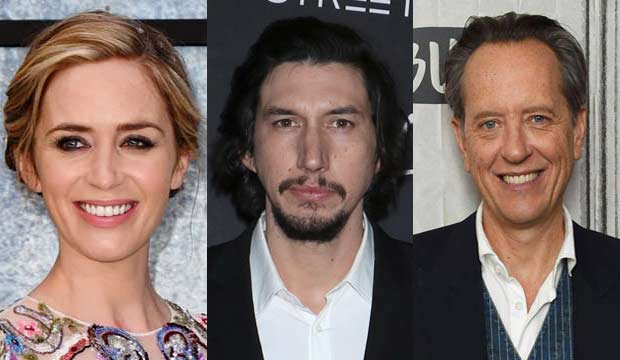 Over the past few months we’ve hosted exclusive video interviews with seven of this year’s Screen Actors Guild Award nominees. Will they get that coveted Gold Derby bump when the winners are announced on January 27? Follow the links below to be taken to their full interviews.

Emily Blunt (“Mary Poppins Returns” and “A Quiet Place”): Blunt is a rare actor nominated for two different film roles in a single year. In “Mary Poppins,” she plays the title nanny, a role made famous by Julie Andrews in 1964. And in “A Quiet Place,” she stars as a mother forced to live in silence as monsters with strong hearing threaten her and her family. (Click here to be taken to her full interview)

Adam Driver (“BlacKkKlansman“): Driver stars in this true life drama as Flip Zimmerman, a Jewish police detective who partners with a black officer (John David Washington) to infiltrate the Ku Klux Klan. Driver also contends at these awards as a member of the ensemble cast, and he’s nominated at the Oscars too. (Click here to be taken to his full interview)

Sam Elliott (“A Star Is Born”): Elliott plays Bobby, the older brother and manager of an alcoholic rock star (Bradley Cooper) spinning out of control. Like Driver, Elliott is also nominated as a member of his film’s cast and has a Best Supporting Actor Oscar nomination for the performance as well. (Click here to be taken to his full interview)

Henry Golding (“Crazy Rich Asians”): Golding stars as Nick, who takes his new girlfriend (Constance Wu) to Singapore to meet his disapproving family. This role is his acting debut, and it has already paid off for him with a SAG nomination as a member of the “Crazy” cast. (Click here to be taken to his full interview)

Richard E. Grant (“Can You Ever Forgive Me?”): Grant co-stars in this biographical drama as Jack Hock, a cheerful grifter who teams up with misanthropic author Lee Israel (Melissa McCarthy) to sell literary forgeries to collectors. Grant also contends at the Oscars for the film, and he previously won a SAG Award with the cast of “Gosford Park” (2001). (Click here to be taken to his full interview)

Constance Wu (“Crazy Rich Asians”): Wu plays Rachel, an Asian-American woman who travels to Singapore to meet her boyfriend’s insanely rich family, who don’t approve of the match. Her nomination with the ensemble cast is her first at these awards. (Click here to be taken to her full interview)

Michelle Yeoh (“Crazy Rich Asians”): Yeoh stars as Eleanor, an overly protective mother who doesn’t think her son’s new girlfriend is good enough for him. The ensemble nomination for the film is the first SAG Awards recognition for the veteran actress. (Click here to be taken to their full interview)