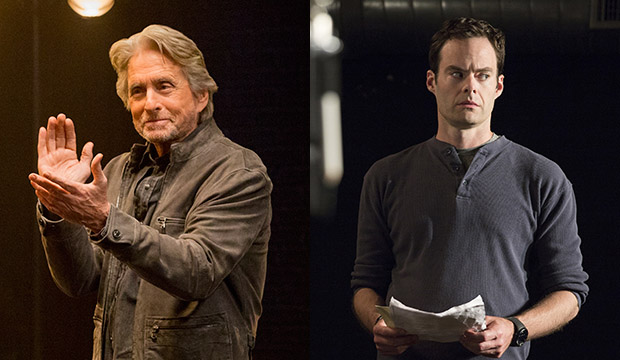 Michael Douglas and Bill Hader are 1-1 in their Best Comedy Actor contests so far. Douglas beat Hader at the Golden Globes for “The Kominsky Method,” but the “Barry” creator and star got him a week later at the Critics’ Choice Awards. So who will take their third face-off at Sunday’s Screen Actors Guild Awards? Our pundits say Douglas.

Douglas has 7/2 odds to take home his third career SAG Award, which would give him a perfect 3-for-3 record; he previously won as part of the “Traffic” (2000) ensemble and for his turn as Liberace in the HBO miniseries “Behind the Candelabra” (2014). Hader, who’s on his first individual nomination, is in second with 19/5 odds.

Both, coincidentally, star on shows centered around acting classes. Douglas has the advantage of being a legendary star, aka one of the SAG Awards’ favorite winner profiles. These voters love to respect their elders or a good/lazy name-check, depending on how you look at it (see: Betty White‘s two wins for “Hot in Cleveland”). And his show is on Netflix, the group’s favorite streaming service/network. But Hader is the reigning Emmy winner, so voters might want to rubber-stamp him too.

But the way this category shook out is primed for a surprise as well. Since the SAG Awards combine lead and supporting TV performances into one category, supporting players Henry Winkler (“Barry”), Alan Arkin (“The Kominsky Method”) and Tony Shalhoub (“The Marvelous Mrs. Maisel”) are the other nominees — all veteran and iconic stars of varying degrees. Winkler and Arkin could pull votes from their respective leading men, and a double vote-split could pave the way for a Shalhoub win.

Shalhoub, who lost the Emmy to Winkler, already has two SAG statuettes for “Monk” (2004-05). A victory on Sunday would make him the first person to win this category for two different shows.

Winkler is currently in third place, followed by Shalhoub and Arkin.