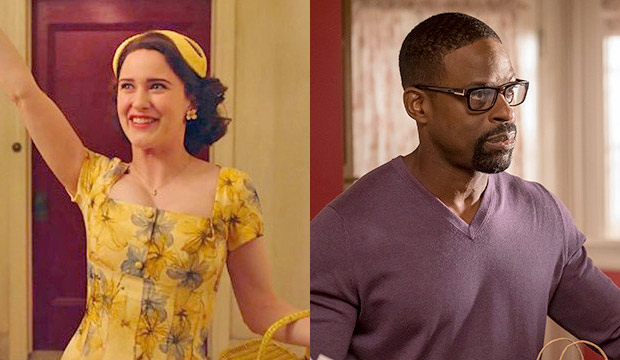 “Will & Grace” star Megan Mullally hosted the 2019 Screen Actors Guild Awards on Sunday, January 27 at 5:00 p.m. PT/8:00 p.m. ET during a ceremony simulcast on TNT and TBS. This 25th annual event honored the best acting achievements in nine television races and six film categories, as decided by more than 120,000 members of the SAG-AFTRA union that represents performers, radio and TV personalities, and other media professionals.

Below, check out our minute-by-minute report on all of this year’s television SAG winners. (Also see our report on the film winners.) What TV shows and stars prevailed at the 2019 SAG Awards? Keep refreshing/reloading this page as we’ll be updating live.

2:00 p.m. — The red carpet has officially begun. Heading into tonight’s ceremony the nominated casts for drama series are “The Americans,” “Better Call Saul,” “The Handmaid’s Tale,” “Ozark” and last year’s winner “This Is Us.” “Ozark” leads all dramas with four bids for Jason Bateman, Laura Linney, Julia Garner and its ensemble. The nominated casts for comedy series are “Atlanta,” “Barry,” “GLOW,” “The Kominsky Method” and “The Marvelous Mrs. Maisel” (last year’s winner “Veep” was not eligible). “Mrs. Maisel” tops all comedies with four noms for Rachel Brosnahan, Alex Borstein, Tony Shalhoub and its ensemble.

2:46 p.m. — And the first TV award of the evening goes to … “GLOW”! Netflix’s 1980s-set comedy prevailed in the category of Outstanding Performance by a Stunt Ensemble in a Television Series, beating out “Marvel’s Daredevil,” “Tom Clancy’s Jack Ryan,” “The Walking Dead” and “Westworld.” All five of these shows are breathing a sigh of relief that “Game of Thrones” was not eligible this year, as it’s won this race seven years in a row (2011-17).

5:10 p.m. — The first televised category is Outstanding Performance by a Male Actor in a Comedy Series and the nominees are Alan Arkin (“The Kominsky Method”), Michael Douglas (“The Kominsky Method”), Bill Hader (“Barry”), Tony Shalhoub (“The Marvelous Mrs. Maisel”) and Henry Winkler (“Barry”). Thanks in part to the vote-split between “Kominsky” and “Barry,” the winner is Shalhoub! At the podium he says he has “nothing prepared,” then singled out Arkin for being an “idol of mine” for years.

5:14 p.m. — Next up is Outstanding Performance by a Female Actor in a Comedy Series and the winner, unsurprisingly, is Rachel Brosnahan (“The Marvelous Mrs. Maisel”)! She beat out Alex Borstein (“The Marvelous Mrs. Maisel”), Alison Brie (“GLOW”), Jane Fonda (“Grace and Frankie”) and Lily Tomlin (“Grace and Frankie”). At the podium Brosnahan makes sure to thank her publicist, lawyers, coach and other various team members as she forgot to thank them at previous awards shows.

5:22 p.m. — Now it’s time for Outstanding Performance by an Ensemble in a Comedy Series. The five talented casts are “Atlanta,” “Barry, “GLOW,” “The Kominsky Method” and “The Marvelous Mrs. Maisel.” Continuing its unprecedented sweep of the 2019 SAG Awards is “Mrs. Maisel”! Shalhoub gives the speech for the entire ensemble, joking that “it’s been so long” since he was last up on stage. He thanks Amy Sherman-Palladino and Daniel Palladino as well as Amazon, then asks the audience to “stick with us” for the next season.

5:42 p.m. — For Outstanding Performance by a Male Actor in a Miniseries or Television Movie, the winner is Darren Criss (“The Assassination of Gianni Versace”)! He beat out co-nominees Antonio Banderas (“Genius: Picasso”), Hugh Grant (“A Very English Scandal”), Anthony Hopkins (“King Lear”) and Bill Pullman (“The Sinner”). Criss singles out his personal hero Hopkins, then questions why the SAG Awards don’t have a category for a miniseries ensemble. Hey, Darren, we agree!

5:53 p.m. — As for Outstanding Performance by a Female Actor in a Miniseries or Television Movie, the winner is Patricia Arquette (“Escape at Dannemora”)! Her fellow nominees were Amy Adams (“Sharp Objects”), Patricia Clarkson (“Sharp Objects”), Penelope Cruz (“The Assassination of Gianni Versace”) and Emma Stone (“Maniac”). Arquette remarks that at first she thought that the other Patricia — Clarkson — was the winner and that she was prepared to congratulate her. She then spends the rest of her speech fighting for the underpaid actors in the union.

6:18 p.m. — Moving on to Outstanding Performance by a Male Actor in a Drama Series, the five nominees are Jason Bateman (“Ozark”), Sterling K. Brown (“This Is Us”), Joseph Fiennes (“The Handmaid’s Tale”), John Krasinski (“Tom Clancy’s Jack Ryan”) and Bob Odenkirk (“Better Call Saul”). Dethroning Brown is Bateman, whose show “Ozark” is up for a whopping four trophies tonight. At the podium Bateman remarks, “This is reassuring.” He earns big applause by mentioning his breakout program “Arrested Development.”

6:26 p.m. — Now it’s time for Outstanding Performance by a Female Actor in a Drama Series. This year’s handful of contenders are Julia Garner (“Ozark”), Laura Linney (“Ozark”), Elisabeth Moss (“The Handmaid’s Tale”), Sandra Oh (“Killing Eve”) and Robin Wright (“House of Cards”). And the winner is … Oh! After previously winning in this same category for “Grey’s Anatomy,” Oh now takes the stage and thanks “a bunch of actors” from “Killing Eve” including co-lead Jodie Comer.

6:36 p.m. — For the final TV award of the evening, Outstanding Performance by an Ensemble in a Drama Series, this year’s contenders are “The Americans,” “Better Call Saul,” “The Handmaid’s Tale,” “Ozark” and “This Is Us.” For the second year in a row, NBC’s family drama “This Is Us” pulled off the cast prize! Mandy Moore and Justin Hartley give the speech this year on behalf of their entire ensemble. “Our show wouldn’t be what it is without you,” Moore declares about all of her show’s guest actors.