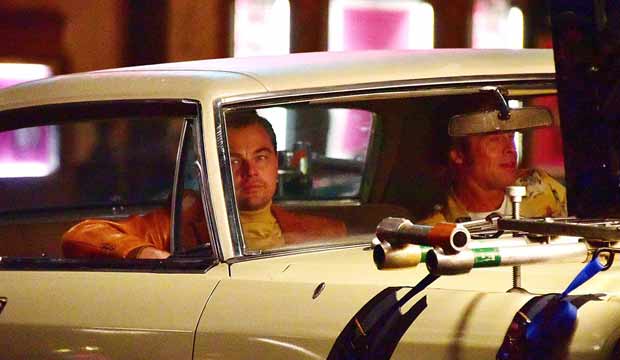 You probably have left-overs lingering from your Oscar-watch party, and your jaw hasn’t quite left the floor after Glenn Close failed to receive Best Actress. But let’s put that all behind us for now and look the array of candidates that might await us for next year.

Here are 20 films that could make their way to the 2020 Academy Awards, given their directors, casts and subject matter.  They include new offerings from the likes of Quentin Tarantino, Martin Scorsese, Greta Gerwig and Jordan Peele.  See what might make the cut on the ballot when awards season comes around again later this year.

Chilean writer and director Sebastian Lelio (“A Fantastic Women”) remakes his acclaimed 2013 Spanish-language movie, “Gloria,” transplanting his story about a lonely middle-aged divorcee (Julianne Moore)  to Los Angeles. Seeking romance, she connects to a recently divorced man (John Turturro) who can’t detach himself from his ex-wife and pushy daughters.

Jordan Peele of “Get Out” fame delivers another more straight-forward horror thriller about a couple who go to a beach house. Expecting to see their friends, they instead are greeted by a group of strangers,  known as “The Tethered,” who look exactly like them.  The cast includes Lupita Nyong’o, Winston Duke and Elizabeth Moss.

SEECheck out Julianne Moore in the trailer for “Gloria Bell” [VIDEO]

This Netflix title directed by John Lee Hancock (“The Blind Side”) follows Texas Ranger Frank Hamer (Kevin Costner) and his former partner, Maney Gault (Woody Harrelson), during the Depression era as the Bonnie and Clyde gang went on a deadly bank robbery spree. The Rangers were tasked to recruit a posse with the aid of a collective of banks. Also featuring: Kathy Bates and John Carroll Lynch.

Director-writer Robin Bissell tackles this truth-based civil rights drama about activist Ann Atwater (Taraji P. Henson) in Durham, North Carolina, who has been battling Ku Klux Klan leader C.P. Ellis (Sam Rockwell) for a decade. Then, in 1971, they decide to co-chair a two-week community meeting to deal with a court-ordered desegregation decree, which turns around their lives.  With Wes Bentley and Anne Heche.

Nicholas Hoult is the young J.R.R. Tolkien , before he became an English professor and author of “The Hobbit” and “The Lord of the Rings” trilogy. The biopic directed by Finland’s Dome Karukoski focuses on the orphaned writer as he finds artistic inspiration and camaraderie with his own fellowship of outsiders while at school. Lily Collins is his love interest and future wife.

SEEJordan Peele’s trailer for his new horror thriller ‘Us’ [VIDEO]

Richard Linklater directs this comical mystery about an anxiety-ridden Seattle woman (Cate Blanchett) who suddenly disappears. Her smart 15-year-old Bee (newcomer Emma  Nelson)  dedicates herself  to tracking her down, discovering some troubling details about her past in the process. Also in the cast: Billy Crudup, Judy Greer, Kristen Wiig and Laurence Fishbourne.

“The Woman in the Window” (October 4)

This mystery thriller, helmed by Joe Wright (“Darkest Hour”)  and based on a 2018 novel by adapted by Tracy Letts, is about an agoraphobic child psychologist who sees a crime being committed as she spies on her neighbors. She has mixed feelings about alerting the authorities.  The stellar cast includes Amy Adams, Julianne Moore, Gary Oldman and Brian Tyree Henry.

The adaptation of a Pulitzer-winning follows the ups and downs of a 13-year-old boy who survives a terrorist attack at the Metropolitan Museum of Art but loses his mother in the bombing. In the chaos, he steals a painting called “The Goldfinch.” He is taken in by a wealthy family on the Upper East Side, but eventually ends up with his wastrel dad in Las Vegas and ends up dealing in art forgery. John Crowley (“Brooklyn”) directs a cast including Ansel Elgort, Finn Wolfhard, Nicole Kidman, Luke Wilson and Jeffrey Wright.

This biographical drama helmed by James Mangold (“Logan”) is based on the rivalry between the two automakers who are pitted against one another at the 1966 Le Mans endurance race in France.  Matt Damon plays automotive design whiz Carroll Shelby who teams with British test driver Ken Miles (Christian Bale). Their goal? To build a car that can finally beat Ferrari at its own game. Also in the cast is Caitriona Balfe, John Bernthal, Josh Lucas and Letts.

Bill Condon (“Beauty and the Beast”) directs Ian McKellen as a career con man and Helen Mirren as his latest target, a widow who he meets online. She invites him to her home and he finds himself caring for her, which could sabotage his scam.

“It’s a Beautiful Day in the Neighborhood”  (November 22)

Tom Hanks tackles the titanic task of portraying one of TV’s most beloved icons, children’s show host Fred Rogers in Marielle Heller’s follow-up to “Can You Ever Forgive Me? Also starring Matthew Rhys and Tammy Blanchard.

Greta Gerwig’s follow-up to “Lady Bird” is the fourth big-screen adaptation of Louisa May Alcott’s 1868 novel about the four March sisters growing up in the post-Civil War era. The cast includes Saoirse Ronan as Jo, Emma Watson as  Meg, Florence Pugh as Amy, Eliza Scanlen as Beth, Timothee Chalamet as Laurie, Laura Dern as Marmee and Meryl Streep as Aunt March.

“Fair and Balanced” (no date yet)

“The Irishman” (due in the fall)

Another starry Netflix extravaganza and a longtime passion project come to life for director Martin Scorsese, written by Steve Zaillian. Robert De Niro is Frank Sheeran, a head of a labor union and alleged hitman for the Bufalino crime family. He reminisces about his involvement in killing labor leader Jimmy Hoffa (Al Pacino). Also in the cast is Joe Pesci, Harvey Keitel, Anna Paquin, Bobby Cannavale and Ray Romano.

Kasi Lemmons (“Eve’s Bayou”) directs this biopic about the life of the famous abolitionist (Cynthia Erivo) who was a worker on the Underground Railroad, making 13 trips to the South and freeing over 70 enslaved people, earning her the nickname “The Moses of the South.” With Leslie Odom Jr., Joe Alwyn, Jennifer Nettles and Janelle Monae.

Australian director David Michod (“Animal Kingdom”) is behind the ambitious Netflix production, co-written with Joel Edgerton,  combines all of Shakespeare’s three historical plays about King Henry IV and Henry V. Starring is Timothee Chalamet as Henry V, Edgerton as Falstaff, Robert Pattinson as the Dauphin and Lily-Rose Depp as Catherine.

“The Laundromat” (no date yet)

“The Last Thing He Wanted” (no date yet)

Dee Rees (“Mudbound”) directs and co-wrote this Netflix political thriller about a journalist  (Anne Hathaway) who quits in the middle of covering the 1984 presidential election to care for her dying father, who happens to be an arms deal-maker. She ends up mired in the Iran-Contra affairs’s arms-for-drugs plot. With Willem Dafoe, Ben Affleck and Toby Jones.