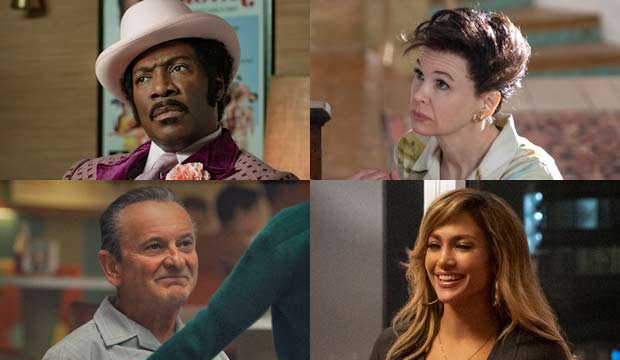 It is mightily important to have a knockout script to work with when starring in a movie that has hopes for awards season attention. But it might be even more essential to have a compelling off-screen narrative that convinces voters that a performer is even more deserving of being granted a gold trophy.

One of the more popular tropes to latch onto while stumping for kudos?  The career comeback. Think Matthew McConaughey capping off his so-called McConaissance with a lead actor Oscar win for 2013’s “Dallas Buyers Club.”

This year, there are four noteworthy but very different thespians who are bouncing back on the big screen with a perfectly tailored role to showcase their talents. Their common ground? All are playing characters based on real people.

Eddie Murphy (“Dolemite Is My Name”): This former “Saturday Night Live” cast member in the ’80s went on to have a string of hit films during the next three decades, including his debut “48 Hrs.” “Trading Places,” the “Beverly Hills Cop” franchise and “Coming to America” and along with two stand-up concert films, “Delirious” and “Raw.” In the ’90s and forward, he did several family films, including “The Nutty Professor, “Dr. Dolittle” and the voice of chatty sidekick Donkey in the animated “Shrek” franchise.

Previous Oscar attention: Murphy found the perfect serious role in the 2006 adaptation of the Broadway musical “Dreamgirls”as James “Thunder” Early,  a character inspired by old-school soul singers such as James Brown and Marvin Gaye. When a music mogul pushes him to do pop ballads, he turns to drugs as his fame fades. Murphy would earn his first and only Oscar nomination for the supporting role but lost to Alan Arkin in “Little Miss Sunshine.” He famously left the ceremony venue right after the trophy was handed out. Since then, his output has been considerably downsized.

Comeback blueprint: Murphy, 58, stars as one of his childhood heroes, African-American cinematic pioneer Rudy Ray Moore, in a tribute to blaxploitation movies, “Dolemite Is My Name,” which has been favorably compared to “Ed Wood” and “The Disaster Artist.” After a qualifying run in theaters for awards contention, the Netflix biographical comedy is currently streaming online. The funnyman is using the movie as jumping-off point and plans to host “Saturday Night Live” in December for the first time since 1984. He is also planning  to film a Netflix concert special and embark on a tour. Also in the works is a sequel to “Coming to America.”

Current Gold Derby combined Oscar odds status: Murphy is ranked at No. 7, tucked between Jonathan Pryce as Pope Francis (“The Two Popes”) at No. 6 and Taron Egerton as Elton John (“Rocketman”) at No. 8. Out of nearly 3,800 users, 403 are predicting Murphy to be nominated and 21 are choosing him to win with 30/1 odds.

Jennifer Lopez (“Hustlers”): This singer, dancer and actress began as a Fly Girl on the comedy skit show “In Living Color.” She made a splash in her first lead role in the 1997 biopic “Selena,” which earned her a Golden Globe nomination while becoming the first Latina  actress to earn more than $1 million for a film. She would go on to star in action thriller “Anaconda” that same year and earned positive reviews opposite George Clooney in  the 1998 sexy crime comedy “Out of Sight.” J.Lo also found crossover success on the pop charts as a singer. But her big-screen career took a nosedive after starring in the 2003  turkey “Gigli” that also starred her then-beau Ben Affleck. Her last positive rating on Rotten Tomatoes was the 1998 animated film “Antz.” Lately, she has become better known as a reality TV talent competition judge on “American Idol” for five seasons and on “World of Dance,” which she executive-produces.

Comeback blueprint: From her provocative opening pole-dance entrance that leaves her drowning in tossed dollar bills to her character’s eventual arrest, Lopez — glorious at age 50 — owns “Hustlers” like a ballsy boss. As slinky ringleader Ramona, the actress takes charge of this true story of how a pack of strippers after the 2008 stock market collapse at a Manhattan club swindled their Wall Street clients out of cash by drugging their drinks and maxing out their credit cards. While Constance Wu is the good-hearted take-it-off ingenue whose back story drives the plot, Lopez gladly slips into a supporting role that allows her to have the most skimpily-clad fun — even tantalizing Usher on stage — while wallowing in a sea of luxury brands and tony surroundings bought with her ill-gotten gains.

Current Gold Derby combined Oscar odds status: With 6/1 odds, J.Lo is sitting pretty on the supporting actress chart at No. 2,  tucked between Laura Dern as a tough divorce lawyer in “Marriage Story” and Annette Bening as Senator Dianne Feinstein in “The Report.” Currently, 2,086 users are predicting she will be nominated while 304 say she will win. Her main competition, both previous Oscar nominees without any wins, are considered overdue. But can they twirl half-naked around a pole in six-inch stiletto heels?

Joe Pesci (“The Irishman”): There is something commendable about this 76-year-old actor coming out of retirement to reunite with his frequent director Martin Scorsese and acting partner Robert De Niro in yet another organized crime saga — one that is far more somber, reflective and epic-length than such earlier outings as 1990’s “Goodfellas” and 1995’s “Casino.” He has done his share of comic roles in the “Lethal Weapon” series, the “Home Alone” films and “My Cousin Vinny,” but he is best known for his short-tempered, violence-prone sociopaths.

Previous Oscar history: Pesci was nominated for his supporting role in 1980’s “Raging Bull” opposite De Niro as boxer Jake LaMotta’s brother and manager Joey, who tries to put a lid on his sibling’s self-destructive anger, jealousy and out-of-control appetite. He would win for supporting trophy as the hot-headed Tommy DeVito, who is likely to kill anyone who even dares to blink at him.

The comeback blueprint: In “The Irishman,” Pesci is allowed to give a relatively quiet and focused performance for once as deceptively sinister mob boss Russell Bufalino, who introduces De Niro’s thuggish hitman Frank Sheehan to the boastful, full-of-himself Teamster leader Jimmy Hoffa (Al Pacino), who recruits this one-man death squad to carry out his dirty work. As the decades pass, the toll of such a lifestyle grows exponentially while these characters go about their nasty business with very few second thoughts.

Current Gold Derby combined Oscar odds status: In a supporting category stuffed with 60 hopefuls, Pesci is lucky to rank sixth, right between Anthony Hopkins as Pope Benedict at No. 5 in “The Two Popes” and Sterling K. Brown at No. 7 as a driven patriarch in “Waves.” With 21/2 odds, there are 1,562 predicting him to be nominated and 67 choosing him as the winner.

Renee Zellweger (“Judy”): Ever since she had Tom Cruise at hello in 1996’s “Jerry Maguire,” this 50-year-old Texas-born actress became one of America’s sweethearts. She brought the working girl into the 21st century with “Bridget Jones’s Diary” and showed off her musical chops as a murderous jazz-age chorine in 2002’s “Chicago.” Her handy, talkative farmer was the acting highlight of the 2003 Civil War-era drama “Cold Mountain” and she would play the supportive wife of Russell Crowe’s heavyweight boxing champ in 2005’s “Cinderella Man.” But substantial roles became harder to find and the actress took a six-year break from movies starting in 2010. When Zellweger came back for 2016’s “Bridget Jones’s Baby,” there was much sexist reaction in the tabloids about whether she had tweaked her looks.

The comeback blueprint: Basically, Zellweger took on a seemingly impossible task by bringing to life a pill-popping, middle-aged Judy Garland and, if the majority of critics are to be believed, got away with it. The year is 1969, when she would perform a series of shows in London. The actress miraculously breathes fresh life into this well-known icon,  complete with singing, changing her way of speaking, altering her outward appearance while channeling the beloved legend just months before she would die from an accidental overdose. If anyone can get through the moment when she breaks down while singing “Over the Rainbow” onstage while the audience chimes in and emboldens her by singing the song back to her without a tear or two, you probably should get your DNA checked to make sure you are human.

Current Gold Derby Oscar odds status: There are only 26 lead actress candidates — a rather shallow pool — and Zellweger tops them all at No.1 with 7/2 odds. Right now, 3,159 users are predicting a nomination and  1,694  say she will win. Her closest challenger is Scarlett Johansson in “Marriage Story,” with 7/2 odds.