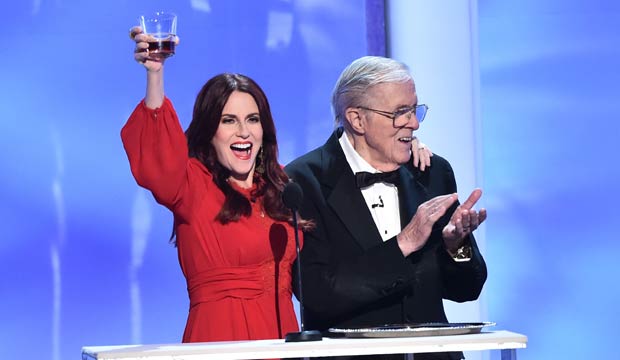 Many of us look to the Screen Actors Guild Awards as a way to guide our Oscar predictions, but it’s not always appreciated for what it is — a TV event. This year’s silver anniversary might have offered surprising winners and affecting speeches, but as a telecast, it continued its tradition of being a straightforward, tightly paced celebration of actors.

Although a neophyte as an awards show host, Megan Mullally came across as polished and relaxed in her opening — no easy feat for her first emceeing gig. After a hilarious intro where she talked about her first acting role in “Casablanca,” the four-time SAG Award winner settled into a brief but clever monologue that gently ribbed several targets. “Everybody knows that winning a SAG Award is the greatest award that an actor can receive this weekend,” Mullally joked, in a jab at Hollywood’s ceaseless awards season.

She also scored big laughs by touching on the issue of ageism in Hollywood by offering condolences to Emma Stone, who is in the twilight of her career now that she has turned 30. Mullally also called out the nominees to poke fun at the stereotypical roles for women, including a wife (Glenn Close) and a woman who must constantly apologize (Melissa McCarthy). But the biggest laugh came from her description of surprise winner Emily Blunt’s role in “A Quiet Place” as “a mom who wasn’t allowed to speak,” a joke made even funnier by the fact that the role was written and directed by Blunt’s own husband, John Krasinski.

But after the monologue Mullally was mostly absent, except for a hilarious moment between Mullally and Smitty, the recurring elder bartender on “Will and Grace” played by Charles C. Stevenson Jr. So Mullally seemed less like a host and more like an opening act. That has been a recurring problem at many awards shows: how to effectively use a host. Maybe the Oscars have the right idea in going without one.

So it fell to the winners to inject emotion into the evening. And several winners did just that. Tony Shalhoub (“The Marvelous Mrs. Maisel”) offered a hilarious thank-you to Amazon’s legal department, in part because he’s renegotiating his contract. Patricia Arquette (“Escape at Dannemora”), after calling attention to the issue of companies not paying background actors appropriately, made a point of thanking special counsel Robert Mueller for defending American sovereignty, one of the few overtly political moments of the evening.

Other winners like Jason Bateman (“Ozark”) and Sandra Oh (“Killing Eve”) offered touching words of encouragement to struggling actors, always a recurring theme at this particular awards show given its focus on union solidarity. Chadwick Boseman, accepting the top prize on behalf of the cast of “Black Panther,” offered inspiring words about “young, gifted and black” people deserving more opportunities in the film industry. He also promised a sequel to the film that grossed over a billion dollars.

And let’s pause to applaud the producers of the telecast for including actor Geoffrey Owens in the show’s customary intro where the stars talk about their humble beginnings as working actors. In a union that contains tens of thousands of professionals who aren’t household names, it was a gratifying moment of celebration to see the former “Cosby Show” actor — who was mocked online for taking a bagging job at Trader Joe’s — acknowledge his struggles and perseverance, to the clear delight of the audience.