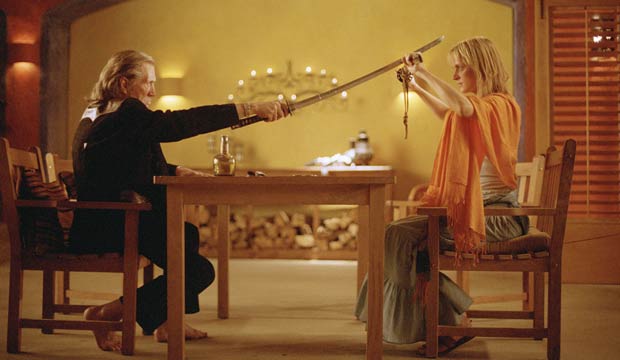 Now that Quentin Tarantino has been cut loose from disgraced movie mogul Harvey Weinstein, he has been proclaiming that his two-part martial arts saga, “Kill Bill: Volume 1” and “Kill Bill: Volume 2.” should be considered a single four-hour film. Hey, the trailer for his fairy-tale ode to Los Angeles circa 1969, “Once Upon a Time in Hollywood,” even says it is his ninth film, not his 10th.  That’s in spite of the titles being released separately in 2003 and 2004.  It was Weinstein who forced him to cut the film in two, the better to boost ticket sales receipts.

As the the whiz at violent cinematic mayhem said recently while doing publicity for his latest film the stars Leonardo DiCaprio and Brad Pitt, “I made it as one movie and I wrote it as one movie.”

However, what do you, the ticket-buying public, believe? Most Tarantino fans — 28% to be exact — support their idol in saying “Kill Bill” should be considered to be a single film since they were filmed simultaneously.

But not so fast. Other QT supporters amounting to 26% of the vote believe that the films should be declared as two separate films — and the first volume starring Uma Thurman as the vengeful Bride is the best. Add to that the 8% who think they are two films since they had to buy two tickets to see them back in the day, and 34% believe it is a double and not a single. Plus, 5% say that they are two films — and No. 2 is better. Now the total is 39%.

Others totaling 20% of respondents simply wish that sometime soon Tarantino releases his cut of “Kill Bill: The Whole Bloody Affair,” an edited version that combines both volumes, on DVD or streaming service. Meanwhile, 13% are holding out hope that the director and Thurman will team up again for a third round of samurai madness with a “Kill Bill: Volume 3.”

Oscar predictions: Why gutsy Keith Simanton (IMDb) bets on 'Once Upon a Time in Hollywood' to win Best…

Oscars showdown for Best Director: Experts stick with Scorsese, Editors back Bong, but what about…

Write on: Quentin Tarantino would tie record with a third Golden Globe for Best Screenplay

Oscars 2020: What are the chances of another Best Picture and Director split?