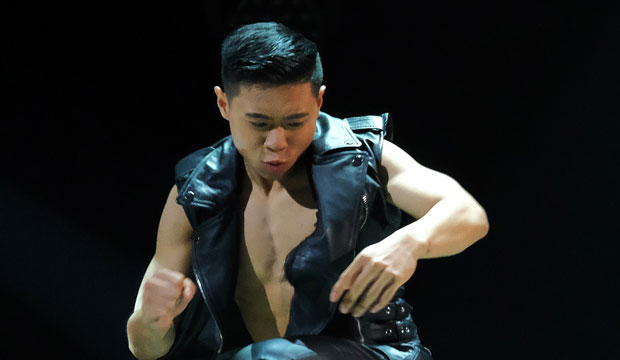 Turns out, ‘So You Think You Can Dance” devotees like what Season 16 winner Bailey Munoz likes. Out of the numbers he did on the show’s finale, 36% chose his jazzy Ray Leeper duet with runner-up Mariah Russell to INXS’ “Need You Tonight” –complete with bare chest and sexy black-leather outfits — as their favorite. The routine revealed a more studly side to this b-boy, a guy who is so sweet and cute that he always gave Mariah flowers when they practiced together.

In second place, with 26% of the vote, was his Aloe Blackstone jazz routine with second runner-up and contemporary dancer Gino Cosculluela to “The Girl From Ipanema,” as they both tried to catch the eye of the imaginary lovely on the beach.

SEE ‘So You Think You Can Dance’ Season 16 finale recap

Coming in third was his funky Luther Brown hip-hop routine with Mariah and an all-terrain vehicle to the song “Tempo.” Next popular was his romantic contemporary routine to “Slide” atop a rooftop prop alongside Mariah. It tied for fourth with his spirtual three-way routine with Gino and ballroom dancer Ezra Sosa to the song “Amen,” with 9% backing.

Alas, his yummy Broadway number as a waiter at an Italian restaurant who gives some personal service to customer All-Star Koine to Dean Martin’s rendition of “Mambo Italiano” only scored 3% of the voting.

All in all, Bailey was the MVP of the Season 16 wrap-up given that he performed in a total nine routines, including group numbers. That is what happens when judges pick your routines for their season-closer encores.