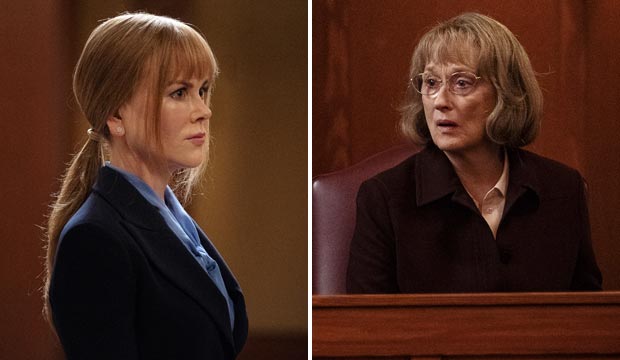 Nothing like dueling Oscar champs to liven up a climatic episode that left TV critics otherwise underwhelmed by the not-very-compelling conclusion to the second season of HBO’s 2017 limited series “Big Little Lies,” which claimed 13 Emmys its first time around.  While Nicole Kidman‘s Celeste was finally able to verbally punch back against her late husband’s mother, Mary Louise (Meryl Streep), whose sneering self-righteous quest to gain guardianship of her traumatized twin grandsons begins to melt just like the Wicked Witch of the West when forced to face her own maternal sins.

Neither of these ladies need more trophies on their shelves — Kidman won an Emmy for her much more demanding and emotionally draining performance on the first season and Streep has plenty trinkets to dust already. But the whole enterprise seems built to simply allow her worshipers to adore the Mighty Meryl on the small screen. Then again, 6% thought Streep never got that one last grabber of an Emmy-securing moment.

In our poll tied to the finale, 39% said the highlight of the last episode was the courtroom battle. At least two of the so-called Monterey Five were denied a deserving arc this season according 11% of respondents. Shailene Woodley as single mom and rape victim Jane flirted with a guy named Corey and hung on the beach. Meanwhile, Zoe Kravitz as Bonnie was riddled with guilt after pushing Celeste’s violent husband to his death and haunted by the event as we learn that her mystical mother was abusive to her when she was young. That she was the lone main character of color on the show was never capitalized upon as a topic, given the show’s landscape of weath, privilege and entitlement.

SEE Will Meryl Streep be the 34th actor to win an Emmy for a David E. Kelley show?

At least 23% thought that the fiercely funny fits of rage thrown by Laura Dern‘s Renata after learning that her wayward husband has caused them to declare bankruptcy, saved the whole season. What truly wasn’t popular? The 1% who thought the soapy outcome of Reese Witherspoon‘s marital woes as Madeline was a cop-out.

The good news is that 20% of the audience didn’t care about the weak writing — they were just happy to bask in the company of these incredible actresses again.

African Americans at the Emmys: A look back at the groundbreakers

Emmys flashback to the first ceremony: Six awards, $5 tickets, and the big winner was a ventriloquist

Reese Witherspoon will only get 1 acting Emmy nomination, our readers predict, which is still better…

Will Oscars afterglow help Laura Dern ('Big Little Lies') claim another Emmy? She will not NOT be a…